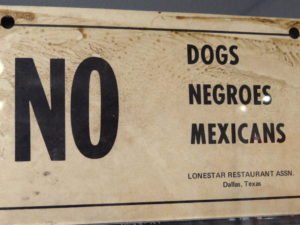 CFPB Policy Official Eric Blankenstein is in hot water. The Washington Post discovered a series of racist blog posts he wrote about hate crimes and the n-word.

CFPB Policy Official Eric Blankenstein blogged in 2004 under an assumed name of “egb3r”.

In the post, he rants about whether the n-word was inherently racist. He also makes the claim that the great majority of hate crimes were actually hoaxes.

Blankenstein refuted a proposal at the University of Virginia that called for harsher academic penalties for intolerant acts.

Fine… let’s say they called him n—–. Would that make them racists, or just a——-?

He also asserted that:

Hate-crime hoaxes are about three times as prevalent as actual hate crimes.

President Trump appointed Blankenstein as a CFPB Policy Official. Blankenstein is one of the highest-paid employees in the government. He is also responsible for enforcing laws that protect minorities from discriminatory practices.

Director of the Office of Fair Lending and Equal Opportunity Patrice Ficklin told the Post:

The tone and framing are deeply disturbing to me as a woman, African American, advocate for LGBTQ rights, and human being. And while he has been collegial, thoughtful and meticulous, I have had experiences that have raised concerns that are now quite alarming in light of the content of his blog posts – experiences that call into question Eric’s ability and intent to carry out his and his Acting Director’s repeated yet unsubstantiated commitment to a continued strong fair lending program under governing legal precedent.

Senators Sherrod Brown, D-Ohio, and Elizabeth Warren, D-Mass., called for Blankenstein’s termination. Blankenstein is one of the highest-paid officials at the CFPB making $259,500.

The Washington Post verified the writer is Blankenstein by examining biographical details in the blog that include his age, his graduation from the University of Virginia, the date of his marriage and a reference to his lawyer father.

CFPB Policy Official Eric Blankenstein did confess to writing the blog. Blankenstein feels he is being targeted for being a white conservative:

The insight to be gained about how I perform my job today by reading snippets of 14-year-old blog posts that have nothing to do with consumer protection law is exactly zero.

Any attempt to do so is a naked exercise in bad faith and represents another nail in the coffin of civil discourse and the ability to reasonably disagree over questions of law and policy. The need to dig up statements I wrote as a 25-year-old. It shows that in the eyes of my critics I am not guilty of a legal infraction or neglect of my duties but rather just governing while conservative.