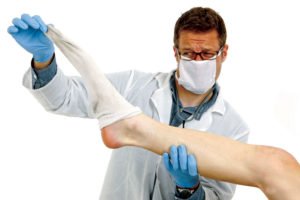 The Detroit Free Press is reporting that a Michigan podiatrist has been sentenced to 28 months in federal prison.

Lawrence Young received about $340,000 from Medicare in a fraudulent billing scam. However, the USDOJ is claiming the number is closer to $1 million.

The 71-year old Michigan Podiatrist admitted to the government that he was billing for a medicated dressing to control swelling of a patient’s foot or leg.

Yet, he used an elastic bandage. The 71-year-old doctor worked at clinics in Dearborn and Sterling Heights. He lived in the posh community of Bloomfield Hills.

The Michigan Podiatrist admitted that from approximately January 2010 through April 2017, he submitted false and fraudulent claims to Medicare for the application of an Unna Boot.

Unna Boot is a type of medicated dressing typically applied after surgery to control swelling of the leg or foot.  Young admitted regularly submitted claims for reimbursement. Although his patients received nothing more than a non-medicated dressing.  The scheme involved the submission of more $1 million in fraudulent claims to Medicare.

Yet, Young’s patients seem to love him. He received glowing reviews from his patients on the internet. Young has a 5-star rating on the medical review website Vitals.

He also has a 4.4 out of 5 rating on the website Health Grades.