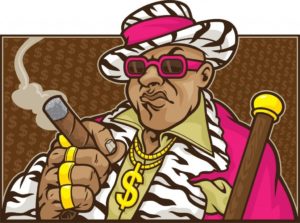 The pimp daddy minister from Michigan has been indicted for multiple charges of wire and mail fraud. The federal government is accusing the pair of using a church to swindle money from unsuspecting investors.

Federal prosecutors have charged Holley and Patricia Gray with conspiracy to commit wire and mail fraud. The government has also charged the pair with four counts of mail fraud and four counts of money laundering. Holley and Gray operated a company named Treasure Enterprise.

Federal prosecutors allege Holley would travel to various churches in Michigan and other states to conduct investment seminars. He would solicit money for his church and investments for his company.

Holley and Gray would use the money for personal benefit and for the benefit of Abundant Life Church. The two would also make payments to earlier investors and pay employees.

Holley hosted financial presentations masked as “blessed life conferences” at churches across the country. Holley presented himself as a man who “prayed for your children.”

He also allegedly claimed he was more trustworthy than a banker with their money. After all, he was a man of God.

The FBI claims Holley would urge church congregants to fill out cards detailing their financial holdings. He would also solicit financial information about the attendee’s friends and family with substantial financial resources.

Holley would then set up a one-on-one consultation between the congregant and Gray. Gray would deceive them into investing with Treasure Enterprise. A company owned by Holley and Gray.

The pair also convinced potential investors to take money from legitimate investments like IRAs and invest with Treasure. The Pimp Daddy Minister promised of guaranteed high returns with no tax consequences.

The Pimp Daddy Minister Claims He’s Safer Than A Bank

Holley and Gray conducted the scam from January 2014 to March 29, 2017. The government also alleges the pair lied and directed others to lie about the status of their investment.

One victim transferred about $80,000 from their 401K account to two separate accounts for Treasure Enterprise.

Holley and Gray received $458,000 in checks and wire transfers from three different victims. The money was later deposited into Treasure Enterprise bank accounts.

Holley and Gray then made cash withdrawals and wire transfers from Treasure Enterprise for $390,722.

Michigan Department of Treasury shut down Treasure in September 2017 for violating the Michigan Uniform Securities Act.

The government seized Holley’s assets after the SEC filed civil fraud charges against him and Gray. The SEC accused him of exploiting church members, retirees, and laid-off auto workers into investing into his business ventures.

Holley and Gray allegedly scammed $2 million from 40 investors when the lawsuit was filed in March 2017.