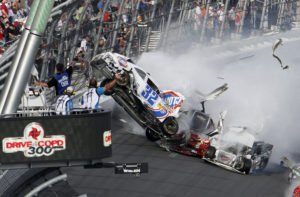 Reuters is reporting that the majority owners of NASCAR are exploring selling their majority stake.

NASCAR has been grappling with an aging fan base and a competitive media landscape. These two factors have weighed heavily on its popularity. Thus, making it less attractive to advertisers and sponsors.

The France family is working with Goldman Sachs Group to identify a potential deal for a buyer.

The company was founded by Bill France Sr. in Daytona Beach, Florida in 1948. Drivers in its races, such as Dale Earnhardt Sr, became household names.

The company has a loyal fan base. However, its loyal fans growing older and younger consumers showed less enthusiasm for the sport. TV ratings down which is causing advertising revenue to plummet.

In a time period that is attractive for live events and live entertainment, Nascar has struggled. There is absolutely a desire to own rather than license content but everything has a price.

The company has also been dabbling in so-called e-sports in a bid to reach younger audiences. Earlier this year, 704Games, the company’s exclusive video game licensee, said it would bring NASCAR Heat Champions to Daytona International Speedway during the Daytona 500 weekend.

NASCAR does not disclose earnings because they are a private company. However, International Speedway Corp, which hosts the Daytona 500 and owns 12 of the 23 of the company’s Cup Series tracks, reported a 1.6 percent year-on-year drop in revenue for fiscal 2017. ISC is pointing “substantial” blame on NASCAR events.

In 2017, Liberty Media Corp spent more than $8 billion to acquire motorsports league Formula 1. The new owners have shaken up its management and put a sharper focus on new media markets. They have also boosted Formula 1’s presence in North America.