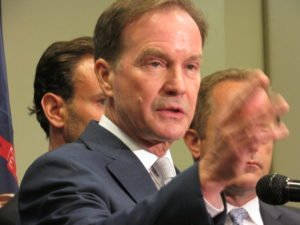 Michigan Attorney General Bill Schuette has a $40 million real estate empire hidden in the Carribean. State lawmakers and his Republican colleagues want to know how and where Bill Schuette got $40 Million as a 32-year public servant.

Bill Schuette is a career politician who has been on the public payroll since 1984. In 1984, he scored an upset victory over former Democratic Congressman Donald Albosta with the financial support of Dow Chemical.

In 1990, he and the Michigan GOP decided he was the man to defeat Carl Levin (D-MI) for the U.S. Senate. The popular Detroit Democrat handed Schuette his first defeat.

Schuette was only unemployed for a matter of days. After being sworn in as governor, fellow mid-Michigan career politician John Engler appointed Schuette as Director of the Michigan Department of Agriculture.

Schuette won a seat in the Michigan Senate in 1994. He served in the Senate until he was term-limited in 2002.

Schuette was then elected a judge on the Michigan Fourth District Court of Appeals. Political pundits found this odd since Schuette had very little if no trial experience.

The extent of which is now coming to light thanks in part to Schutte’s political ambitions and wanting to be governor. 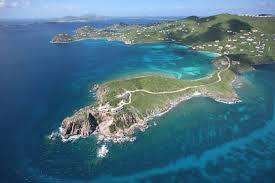 Political debates between candidates of the same party are like watching Nascar. It’s boring to watch and the politicians all talk in circles and about the same thing.

At a GOP Gubernatorial debate in Grand Rapids. Lt. Governor Brian Calley dropped a bomb on Bill Schuette. He revealed Schuette had a secret real estate empire worth $40 million hidden in the U.S. Virgin Islands.

Schuette denied he had any involvement in the multi-million dollar development.

I have no idea what he’s talking about.

Schuette then changed his tune. He claimed that his investment in the development was held in a blind trust. However, this is not entirely true. Schuette’s signature is on deed transfers and other documents related to the development.

The documents also reveal that Schuette’s company, Vircom LLC is in a partnership with Doan Estates.

The companies buy and sell land in an area known as Ditleff Point near St. John. They also own at least 33 luxury real estate parcels worth nearly $40 million.

Schuette has also called on the public officials to disclose all personal financial information in an interview with Bridge Magazine:

Republican Bill Schuette has called for state elected officers and candidates for public office to disclose personal financial information similar to members of Congress. He disclosed his 2016 federal income tax return to Bridge, filed jointly with his wife, but did not disclose specific information about significant assets or travel, which are among items that must be disclosed by members of Congress and others…

Schuette released his tax return showing an adjusted gross income of $375,466. However, he did not report any income earned from Vircom.

Despite millions of dollars of offshore transactions benefiting himself, Bill Schuette is treating taxpayers like his own personal piggy bank! -Calley Campaign Spokesman Mike Schrimpf

Properties linked to Schuette’s Vircom LLC and companies tied to his siblings appear to be part of Ditleff Point. A company website describes it as an exceptional gated community on a 47-acre peninsula.

One of the properties is a 0.94-acre beachfront parcel. Vircom has it listed at $2.5 million. U.S. Virgin Islands Recorder of Deeds list both Vircom as owners of the property.