MFI-Miami Names The 10 Wealthiest Neighborhoods In Florida. Half Of Them Are In Palm Beach County

MFI-Miami has done the research and has discovered the top ten wealthiest neighborhoods in Florida. It’s no surprise that all of them are in South Florida and that half of them are in Palm Beach County. 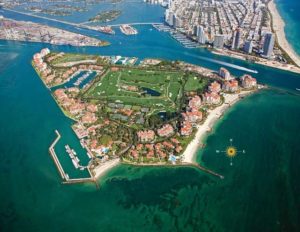 Fisher Island is a barrier island and is the wealthiest neighborhoods in America. It is located three miles offshore from mainland Florida near Miami. Fisher Island has the highest per-capita income in the United States at $236,238. This is in part due to the low population of only 500 people.

The only access to the island by helicopter or boat. A ferry which runs to and from the island 24/7.  The island is truly where the wealthy go to get away. Fisher Island has been home to the likes of Oprah Winfrey, Andre Agassi, and Mel Brooks.

Jupiter Island is the home to golf superstars such as Tiger Woods, Lee Trevino, and others. Celine Dion, Alan Jackson, and other celebrities have had homes on the island. It comes in second on the list of Florida’s wealthiest neighborhoods.

The population of the island is around 830 people, with an annual per-capita income around $200,000. Homes are as lavish and beautiful with prices ranging from $2 million to $72.5-millions.

Jupiter Island is the world’s wealthiest private club. It also rests quietly away from the rest of South Florida.

Golf, Florida has one of the highest incomes in America. The community has a per-capita income hovering around $145,000. An island with the name of Golf Island might make you think the name came from a 1950’s planned community. However, the name actually came from the number of early settlers who were from Golf, Illinois.

Golf is a retirement community of 260 people that is situated near Boynton Beach.

Golf is different than the other notable communities on this list. The residents of Golf keep a quiet sophistication on their lavish lifestyle. This is a community where posh is more impressive than swag and old money rivals the nouveau riche. 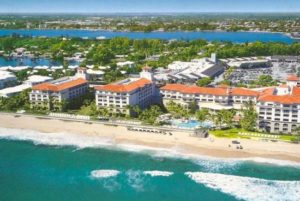 Manalapan has a unique list of musicians from Billy Joel and Yanni. It is also home to disbarred lawyer F. Lee Bailey and the founder of The National Enquirer, Generoso Pope, Jr.

This small beachside community has a population of just over 300 and an annual per-capita income around $145,000. This small town is one of the few that has been able to push back against large-scale developers.

Manalapan shares part of Hypoluxo island with the neighboring town of Lantana.

Manalapan is secluded and quiet. The perfect place for the wealthy to stroll.

Indian Creek is a community in Miami-Dade County with less than 50 residential homes. It is also the home to the Indian Creek Golf Club and has one of the top ten highest income communities in the United States it has an annual per-capita of $137,382.

Indian Creek is known as Florida’s “Billionaire Bunker” and all of the homes surround a golf course.

The small harbor island boasts some of the wealthiest names and biggest property price tags in Florida. With only a handful of homes and properties to buy and sell, the residents tend to be rather exclusive. Indian Creek was home to Beyonce and Jay-Z. Controversial Sheik Mohammed al Fassi and Julio Iglesias also had homes on the island.

Orchid Island is located is located about an hour north of Palm Beach. The per- capita income of this tiny community of 200 is $135,870. The majority of the town is a gated community.

The remaining part of Orchid is uninhabited islands and wilderness preserves.

However, hidden among the preserves and wildlife are some fantastic million dollar Mediterranean style homes reaching well into the tens of millions of dollars. The sparse population of the island allows for a tranquil and relaxing lifestyle in the lap of luxury. The mega-mansions are stunning and hidden behind the mask of beauty are water and tall trees.

Located south of West Palm Beach is Gulf Stream. Gulf Stream with a population of about 750 has a per-capita income of $133,651. It is also one of the wealthiest communities in Florida.

Gulf Stream is a prototypical Country Club Community founded in the 1920’s by the Gatsby crowd. Gulf Stream was designated as part of a State Historical Scenic Highway to preserve the Australian pine canopy.

Yet, unlike many of the other exclusive neighborhoods on this list, Gulf Stream has a steady mix of multi-million dollar homes, as well as condos in the hundreds of thousands of dollars overlooking the ocean.

Palm Beach is also one of the largest communities on this list with a year-round population nearing 11,000. The population nearly triples to 30,000 during seasonal months. Palm Beach has been one of Florida’s wealthiest neighborhoods since the 1920s.

Palm Beach also has a per-capita income of $109,219 and it is also one of the wealthiest communities in the United States.

The Robb Report also named Palm Beach as America’s Best Place to Live. With distinctions such as “abundance of pleasures” and, “strong community-oriented sensibilities.”

Indian Shores borders Orchid Island (see above). The population is estimated to be around 4,000 with a per-capita income of $102,511.

Indian Shores remains in the top ten most affluent communities in Florida despite the affordability. Like much of Florida, the population nearly doubles during peak tourism season.

Locals have the luxury of separating themselves from an almost party-like scene as many of the town’s homes are set back within their quiet and guarded neighborhoods. Life in Indian Shores can offer a nice mix of wealth, as well as more affordable living in a paradise setting. 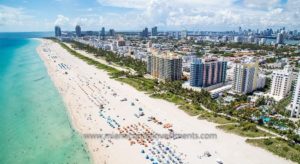 Bottoming out the list of Florida’s top 10 wealthiest neighborhoods is South Beach. South Beach has a population close to 40,000 and has a per-capita income of $90,938. The community is known as much for its nightlife and its beaches. It is also a favorite location for tourists.

It also has the 10th highest per-capita in Florida and is also known to some of the nicest mansions in Florida.

South Beach is also one of the best places to spot a celebrity in Florida.

Single-family homes are difficult to come by in South Beach. However, extravagant condominiums are common.

South Beach is more a town of the young and party-friendly celebs such as the Kardashians. It’s hard to ignore the fact that South Beach also has money and plenty of people who make it.