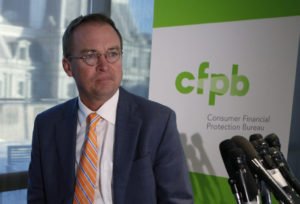 CFPB Mick Mulvaney continued his push to eliminated the power and influence of a federal agency that he once called a “sick, sad joke.”

He asked Congress Monday to significantly increase its oversight of the Consumer Financial Protection Bureau. CFPB policy would then be based on the flakey political whims of 535 members of Congress.

The CFPB issued its first semi-annual report to Congress since Mulvaney took over as acting director of the agency last year.

The Bureau is far too powerful, with precious little oversight of its activities. The power wielded by the Director could all too easily be used to harm consumers, destroy businesses, or arbitrarily remake American financial markets. I’m requesting that Congress make four changes to the law to establish meaningful accountability for the Bureau. I look forward to discussing these changes with Congressional members.

The CFPB was born out of the Dodd-Frank Wall Street Reform and Consumer Protection Act. The agency operates independently and does not answer to Congress.

The agency gets its funding directly from the Federal Reserve instead of the standard congressional appropriations process. Republicans have hated this idea. It is also one of the reasons the CFPB has drawn their constant criticism.

When the CFPB needs funding for an investigation they go the Federal Reserve not Congress. This would change if Mick Mulvaney gets his way.

Congressional Republicans have been salivating to gut the CFPB. Mulvaney is all too happy to whore himself out. Matter of fact, Mulvaney knocked people out of the way like a shopper on Black Friday to become CFPB Director.

Mulvaney is asking Congress to make the following changes:

Mick Mulvaney then gets political about the need for the CFPB to have its independence taken away:

The best that any Bureau Director can do on his own is to fulfill his responsibilities with humility and prudence, and to temper, his decisions with the knowledge that the power he wields could all too easily be used to harm consumers, destroy businesses, or arbitrarily remake American financial markets.

To read the full semi-annual report from the CFPB, click here.