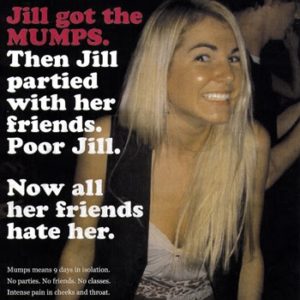 Goldman Sachs is battling to contain a rare but contagious outbreak of mumps after several employees contracted the disease.

Several employees on one of its trading floors showed signs of the disease last week.

A Goldman Sachs employee with knowledge of the matter told Business Insider:

Goldman Sachs told people to get shots or visit the firm’s health center if they didn’t receive the vaccine during childhood.

Goldman’s health center was administering the mumps vaccine for free on Friday.

The Centers for Disease Control says Mumps is caused by a contagious virus. Symptoms usually involve fever, headache and muscle aches. Mumps symptoms also include exhaustion and reduced appetite. Those signs usually give way to a swelling of the salivary glands. If untreated a victim could get puffy cheeks and a swollen jaw.

There were about 186,000 cases were reported in the US in 1967. However, vaccinations have essentially wiped out the disease. Children receive the vaccine in a series of shots. They receive one in the first year of life and another at the time they begin school. Mumps cases have dropped 99% due to vaccinations.

Even so, outbreaks do still occur. In 2014, members of the Pittsburgh Penguins hockey team came down with the disease. And in the developing world, where some of Goldman’s employees were born or spent their childhood, vaccination programs are much less comprehensive.

Is Lloyd Blankfein About To Sing So Long Farewell?