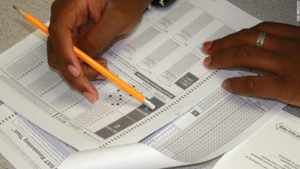 Emmanuel Bao of Buffalo, NY, pleaded guilty to mail fraud in a bizarre case involving the New York State DMV. The charge carries a maximum penalty of 20 years in prison and a $250,000 fine.

Assistant U.S. Attorney Jonathan P. Cantil stated that Bao is a French and Swahili interpreter. Bao interpreted the New York State DMV driver permit written test for multiple out-of-state individuals. Most of the individuals were had refugee status from Africa and the Caribbean. They also recently relocated from the Massachusetts area.

Bao created a scheme to defraud the New York State DMV by not interpreting the written tests. Instead, Bao provided answers to the questions for the applicants. He also listed his own address on the permit application rather than the address of the applicant. As a result,  the DMV mailed the official driver’s permit to Bao’s address. He would then mail the permit to the applicant’s actual address. Massachusetts has reciprocity with the New York State DMV.

Bao also charged a fee for taking the test. The test takers had failed the Massachusetts written driver’s permit test before paying Bao for his services.

The plea is the result of an investigation by ICE, Homeland Security Investigations, and New York State.