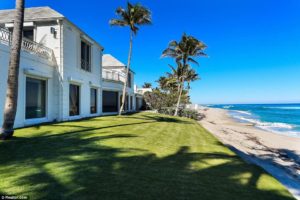 Federal Judge Maryanne Trump Barry has put her eight-bedroom beachfront mansion on the market for $23 million. She paid $11.5 million for it in 2004. Barry is a federal appellate court judge for the US Third Circuit. She is also the older sister of President Donald Trump.

The Palm Beach Daily News reports that a sales contract is pending on the eight-bedroom beachfront mansion.

The 10,455 square foot property also has 11 bathrooms and an open entertaining area with a formal living room. The home also features a sunroom, a family room, and a library.

Outside there’s a large backyard in-ground swimming pool with a balcony with a view of the ocean.

The house was first listed for sale in early December according to the New York Daily News.

Barry is an attorney and inactive senior circuit judge of the US Court of Appeals for the Third Circuit in Philadelphia. The court serves Pennsylvania, New Jersey, Delaware and the Virgin Islands.

Trump Barry also has two house in the neighborhood next door to each other.

Barry was nominated to the federal bench by President Ronald Reagan in 1983.

She was nominated to the United States Court of Appeals for the Third Circuit by President Bill Clinton in 1999.

Barry developed a Judge Judy reputation on the bench with a strong command of her courtroom. She also presided over the conviction of Louis Manna, the Genovese crime family boss.