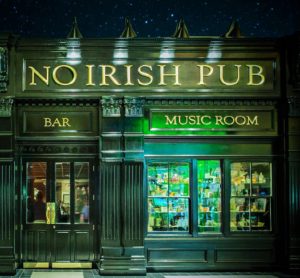 He also posted signs in the window calling Irish people “lazy” and “lower class citizens” in his windows. Most of the drunken Irish-Americans attending the parade lived up to their Irish stereotypes by starting fights with the bouncer at the door.

Bouncer Bill Johns would use language from century-old newspapers to berate the Irish to people passing by:

People were outraged. They didn’t understand how someone could be so racist.

Dan Margulis wasn’t trying to spark fights. He wanted to prove a point about immigration and Irish-American hypocrisy toward it.

Margulis wanted to raise awareness about how poorly Irish immigrants were once treated in the United States.  He wanted to use it against the backdrop of modern-day conversations about race and immigration.

On a day when everyone is proclaiming solidarity with an immigrant group we wanted them to feel what it was like to be treated like an Irish immigrant. Hopefully, that would get them to think about the way we treat current immigrant groups.

No Irish Pub from Atlas Industries on Vimeo.

Fake Pub Proves A Point To Irish-Americans About Discrimination 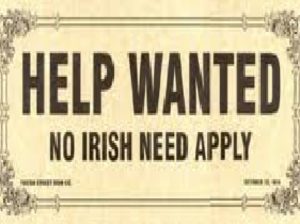 The pub that enraged Irish-Americans at the Detroit Saint Patrick’s Day parade was actually fake. Only a few people were in on the project.

Margulis rented an empty space on Michigan Avenue on a strip between two popular Irish themed bars for the St. Patrick’s Day Parade last weekend. He hung a sign that said “No Irish Pub.”

Margulis also created a website called No Irish Pub. Additionally, he wants to remind Irish-Americans about the discrimination their grandparents and great-grandparents faced coming to America.

The people who got really angry were handed a brochure that explained the project.

There were few people who got extremely angry and wanted to fight and we diffused them. Once we explained the concept, people thought it was fantastic. Our goal wasn’t to make people mad. It was to make people think.