The Wall Street Journal is reporting that Goldman Sachs CEO Lloyd Blankfein is preparing to sing So Long Farewell to Goldman Sachs. Blankfein has led the firm since 2006. He was also at the helm steering it through the 2008 financial crisis.

From the WSJ report:

Lloyd Blankfein is preparing to step down as Goldman Sachs Group Inc.’s chief executive as soon as the end of the year, capping a more than 12-year run that has made him one of the longest-serving bosses on Wall Street.

Goldman is likely to follow an announcement of Mr. Blankfein’s departure with a quick transfer of power and isn’t looking beyond Goldman’s two co-presidents, Harvey Schwartz and David Solomon, to replace him, people familiar with the matter said.

The timing of any moves could still change, and the 63-year-old Mr. Blankfein is firmly in control of his exit, the people said. The current thinking, though, is that he will retire ahead of or early in Goldman’s 150th anniversary year in 2019, a fitting send-off for the history buff. 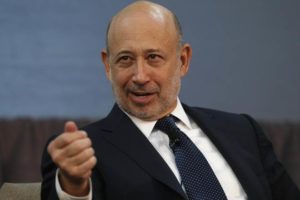 Reports suggest the 63-year-old Goldman Sachs CEO is reportedly ready for the next stage of his career.

Bloomberg claims Blankfein isn’t going anywhere. Blankfein himself said Friday that the WSJ report is not an official announcement from him or the company. The Goldman Sachs CEO took to Twitter after the WSJ report to deny the report.

It's the @WSJ's announcement…not mine. I feel like Huck Finn listening to his own eulogy.

Goldman Sachs promoted David Solomon and Harvey Schwartz to serve as co-presidents, and as the WSJ reported, Goldman’s search for Blankfein’s replacement likely won’t extend beyond those two.