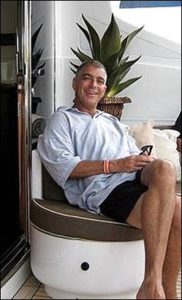 Disgraced Foreclosure King David Stern sold his South Beach condo for $14.8 million. It is now the top condo sale this year for Miami Beach. The deal closed on Thursday. Stern sold the unit for $3 million below asking price.

Stern isn’t alone in taking a 20% hit on his luxury condo. The Miami market currently has a 48 month supply of luxury condos.

The property at Apogee South Beach is owned by SF 800 Pointe LLC. The LLC is controlled by Stern’s attorney Forest McSurdy.

The lucky new owner is John Vogelstein of New York. Vogelstein is chairman of New Providence Asset Management. He is also a senior adviser to Warburg Pincus.

Stern has had the unit on the market since he lost his law license. He was recently asking $17.9 million. Records also show investor William Duker sold the three-bedroom unit to Stern’s LLC for $12.4 million in 2013.

Freddie Mac and Stern settled the legal battle in 2013. However, the lawsuit spawned investigations of how Stern was handling other foreclosure cases.

Stern’s firm also became the poster child of Robo-signing mortgage assignment affidavits and other documents needed to foreclose on a homeowner.

As a result, Stern was disbarred by the Florida Supreme Court in 2014.