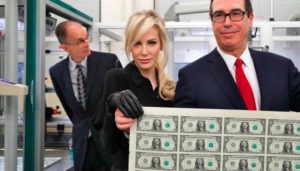 Treasury Secretary Steve Mnuchin and his wife found a nicely wrapped gift waiting for them on the front porch of their Bel-Air home.

Mnuchin and his wife found a wrapped in holiday gift paper filled with horse manure when they arrived home for the holidays.

The package was thought to be a bomb or a suspicious package. However, officials later said its contents were not a threat. Police did not release further information about the package.

LAPD Sgt. R. Briggs later described the contents of the package to be horse feces.

Mnuchin became Treasury Secretary in February. Mnuchin also worked as the finance chairman for Donald Trump’s campaign for president. He previously worked in banking and finance before joining public service. He was CEO of Dune Capital Management which produced the movie, Wonder Woman. In addition, Mnuchin worked for The Goldman Sachs Group earlier in his career.

His wife, Louise Linton, once went viral for belittling a woman on Instagram for making less money than her. The couple also made headlines when they posed with a sheet of money in a photo widely mocked on social media.

Treasury Secretary Steve Mnuchin came under intense criticism as Chairman of OneWest Bank. Mnuchin worked out a sweetheart deal with the FDIC to acquire IndyMac Bank during the financial crisis. OneWest then engaged in a campaign of massive foreclosures. As Senator Ron Wyden (D-OR) described it:

OneWest churned out foreclosures like Trump’s Chinese factories churned out shirts and ties.

Mnuchin and his brother also pocketed $3.2 million from Bernie Madoff’s Ponzi scheme when their mother died.