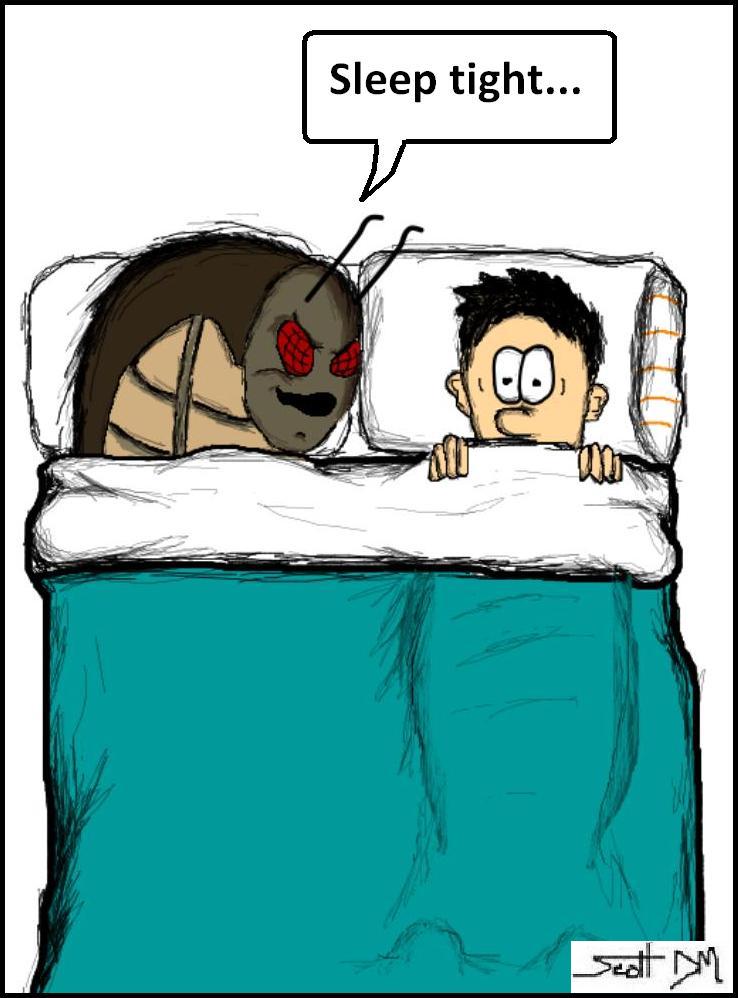 You may remember Brooklyn Slumlord Frank Rosemberg. He’s the Brooklyn scumbag who abused the Public Administrator’s Office to scam an Alzheimer’s victim and her family out of their home.

Slumlord Frank Rosemberg can now add King of all Bedbugs to his resume. Rosemberg’s tenants have been calling us and telling us their stories since we first started writing about him in June.

Rosemberg’s tenants say they have been complaining about bed bug infestations for months. They also say that when they complain Rosemberg’s girlfriend gets nasty with them on the phone. That is if one of them will actually answer the phone.

Tenants allege when they do talk to Rosemberg’s girlfriend she calls them dirty pigs and other derogatory names. They also allege she always ended the call with:

Don’t let the bed bugs bite! AND DON’T BE LATE WITH THE RENT!

Before we go any further, let’s debunk some of the misinformation out there about bed bugs. You can also learn more at Bedbugger.com.

First of all, bed bug infestations have nothing to do with how clean or dirty of a person you are. Everything from yuppie apartment building in Tribeca to the NYC Department of Health has had an outbreak. Howard Stern has even had to deal with the nasty buggers.

Just look at Frank Rosemberg. He looks and smells like he’s been holed up in a Unabomber shack for years.

Rosemberg wants to blame his tenants for the bed bug infestation. In reality, it’s more about him being a bad landlord or a slumlord. Take your pick.

Bed bugs don’t even really live in beds. They can infest everything from baseboards to alarm clocks. They can also scale electrical wire like a crazy parasitic Spider-Man.

Living With A Bedbug Infestation

One tenant described the nightmare of living with millions of squatting bed bugs.

It was a nightmare. The bed bug bites on my ankles made it look like I had Chicken Pox. Getting rid of them was a something out of a horror movie! Rosemberg is a true scumbag. I hope he burns in hell!

The tenant also told us that she had to solve the problem herself since slumlord Frank Rosemberg would not deal with it. She is now preparing to take legal action against Rosemberg.

The tenant told us about how she smeared Vaseline on her bed frame and the legs of bed to create an impassable barrier between her and the bed bugs.

Why Vaseline? Vaseline is like quicksand for bed bugs. The tenant also said she read that nesting the legs of your bed in bowls of baby powder also works.

Unfortunately, I applied the Vaseline to the bed frame too late. The bed bugs had already established a colony in my mattress.

The tenant also claims she was forced to turn her body into a greasy insect trap.

She would slather her arms and legs along with her wrist and ankles with Vaseline before going to bed. She would also apply multiple coats of Vaseline until she resembled a glazed doughnut. After all, bedbugs love their midnight munchies.

The tenant claimed it worked:

The bugs would crawl up to me trying to feast on my delicious blood. They would immediately get stuck in the Vaseline. I would go into the bathroom the following morning to scrape off the glaze. The glaze would be covered in dead bed bugs. It looked like I was peeling off a giant scab.

Is Frank Rosemberg An Absentee Landlord or Scam Artist?

Tenants say Slumlord Frank Rosemberg is almost impossible to reach when there is an issue. Yet, he is pounding on the door on the first day of the month if he hasn’t received the rent.

One tenant who wished to remain anonymous also told us:

God forbid we were a day late paying the rent or we paid the rent in anything but cash. Rosemberg would be over here pounding on our door with his goons in tow!

Rosemberg doesn’t just ignore his tenants. He also ignores his lenders and investors. Many of his investors were seniors who invested their IRAs and retirement savings with Rosemberg’s failed real estate endeavors. Some of these investors are now forced to eat cat food to make ends meet.

Rosemberg has not paid his creditors or investors in over a decade. He holds them off by abusing the court system by repeatedly filing bankruptcy. He also likes to pull the old Donald Trump trick of filing frivolous lawsuits as a pro-se litigant.

It doesn’t look like Rosemberg is broke. Rosemberg and his girlfriend appear to be living the Robin Leach lifestyle of champagne wishes and caviar dreams. The lovebirds live in his $1.3 million home in Westchester County and drive around in S-Class Mercedes Benzes. The two also take quarterly first-class trips to the Caribbean and stay at 5-star hotels.

Yet, several of his elderly investors are being forced to eat cat food to make ends meet.