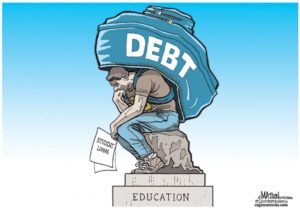 The pending student loan debt crisis is unnerving and it has all the same traits as the mortgage crisis. from a decade ago.

Now a major player in the global financial markets is sounding alarms.

Citi Global Perspectives & Solutions recently raises the specter to that of the subprime mortgage crisis.

According to the Citi report:

Outstanding student debt has almost doubled since 2009. The average undergraduate student borrower graduates with more than $30,000 in debt.

Collectively, Americans held $1.34 trillion of student loan debt as of March 31, 2017. This is a $34 billion increase from the previous quarter, according to the Federal Reserve Bank of New York. This is also bigger than the debt the nation of Colombia owes the IMF.

This figure stands second only to mortgage debt, which was $8.63 trillion.

The student loan default rate is down from a high of 14.7% in 2013. However, the report states the current rate of about 11% is still elevated.

Missing one loan payment can wreak havoc on an individual’s credit score. In addition, missing several can have a disastrous impact on their long term financial security. Borrowers in most cases are unable to discharge student loans in bankruptcy. Yet, there are ways to fight a student loan.

Borrowers can attack the dollar amount of the debt and the lender’s legal standing. This is similar to contesting a foreclosure.