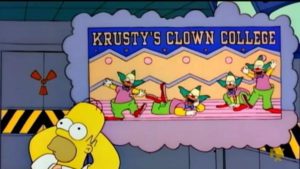 The Robert Kiyosaki Financial Clown College is coming to South Florida. Kiyosaki’s Rich Dad Education wants to teach the masses of how to become rich in real estate. Kiyosaki has made a fortune over the past two decades peddling his financial self-help “Rich Dad, Poor Dad” books to the financially inept.

But don’t get too excited about meeting Robert Kiyosaki. He won’t there to help you pull yourself up out of the mediocrity of suburbia. Only his surrogates from the Robert Kiyosaki Financial Clown College will be there to help move you to the big deluxe condo in the sky just like George and Weezie.

If you attend, the Robert Kiyosaki Financial Clown College guarantees you will learn how to:

What The Critics Say About The Robert Kiyosaki Financial Clown College

Rich Dad, Poor Dad is one of the dumbest financial advice books I have ever read. It contains many factual errors and numerous extremely unlikely accounts of events that supposedly occurred. Kiyosaki is a salesman and a motivational speaker. He has no financial expertise and won’t disclose his supposed real estate or other investment success. Rich Dad, Poor Dad contains much wrong advice, much bad advice, some dangerous advice, and virtually no good advice.

A good chunk of what’s actually in the book is self-help boilerplate.

…the no-nonsense prose is apparently convincing enough to blot out the nonsense.

The likes of Kiyosaki seems to assert those at the bottom deserve their failure. One of his sayings is “Winners are not afraid of losing, but losers are.” But for a fee, he’ll show you how to drag your sorry arse out of the ghetto of mediocrity.

Kiyosaki filed for Chapter 7 bankruptcy protection in 2012. He lost a $24 million court judgment from one his earliest financial backers.

The Learning Annex sued Kiyosaki after he stiffed them out of money he owed them. According to the New York Post:

The Learning Annex was responsible for arranging the speaking engagements and platform that led to his massive success. Apparently, the fame went to his head because according to court papers never paid the Annex its rightful share.

Is Rich Dad Real Or A Figment Of Kiyosaki’s Mind?

Robert Kiyosaki has come under fire making up the story of “Rich Dad” to sell books.

Kiyosaki also tells Smart Money that Rich Dad died in 1992. He then claims the opposite by stating Rich Dad is alive and is a reclusive invalid.

In addition, Kiyosaki also later admits Rich Dad is a composite of several people. Yet, he compares Rich Dad to Harry Potter:

So I guess the final word is that Rich Dad is as real as Harry Potter. I suppose that, in turn, means that the way to become financially independent is to get a magic wand—or to write a book about fictional characters who did.