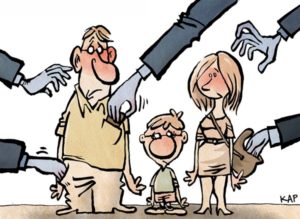 GOP leaders in Washington want Michigan taxpayers to shell out billions of dollars in stealth tax increases starting in October.

President Trump’s inaugural budget calls for the abolishing of billions of dollars in tax deductions for state and local taxes. Trump’s budget also calls for eliminating the tax deduction for mortgage interest. The plan would not only affect Michigan. It will also affect 42 other states that have state and local income taxes.

GOP Leaders Paul Ryan and Mitch McConnell want to make abolishing these deductions a top priority. They want them included in the 2018 fiscal budget.

The Michigan Republican delegation to Congress seems to be blindly marching to Ryan and McConnell’s drum in favor of the stealth tax increases.

The Michigan Democratic Party has yet to issue an official statement on the proposed stealth tax increase.

Michigan supporters of Ryan’s plan claim deducting state and local taxes subsidizes high tax states like Michigan. What Ryan’s supporters are basing this claim on is unknown but opponents of the plan say the opposite. Opponents claim Michigan taxpayers send more money to Washington than it receives back. Therefore, the deduction for state and local taxes is the only fair way to balance it out.

Michigan could also lose an additional $432 million in revenue to its general fund if GOP leaders repeal Obamacare. The revenue comes from new tax revenue and costs being covered by the federal government. In addition, repealing Obamacare could also put a $75 million hole in the state budget.

Michigan’s Medicaid expansion has also been good for Michigan’s economy. It has created $2.3 Billion in personal spending power to Michigan taxpayers according to MLive:

A University of Michigan study published in the New England Journal of Medicine found the expansion’s “ripple effects generate more than 30,000 new jobs every year — one-third of them in health care and 85 percent of them in the private sector. These jobs yield about $2.3 billion more in personal spending power for Michigan residents.”

“The new jobs and related personal spending are generating approximately $150 million in income and sales tax revenue annually for the state. The state will also continue to save money it would have spent on other safety net programs if Medicaid had not expanded,” the U-M study says.