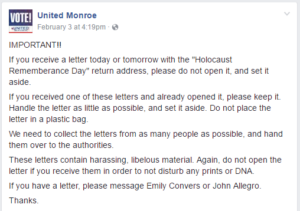 I think it is pretty safe to say that the Jew bashing group United Monroe has hit rock bottom. Especially now that this latest apparent Emily Convers hoax and her fake moral outrage that accompanied it has blown up in her face.

Someone sent out an anonymous mailing to people throughout Monroe with a return address stating “Holocaust Remembrance Day.”

The mailing has the earmarkings of a false flag and Emily Convers over-the-top reaction to it lends credibility to this theory.

Emily Convers frantically blasted out emails to everyone in Monroe telling them not to open the letter and began writing frantically about the mailing on United Monroe’s Facebook page.

The way Allegro and Convers told the story you would think Postal Inspectors and the FBI were creating a multi-state dragnet to hunt down the perpetrator(s) like in the movie, The Fugitive.

All because someone mailed a “vile” letter that allegedly made Emily Convers sob like a baby while eating cookie dough.

What was in these “vile” mystery envelopes that she claimed warranted “federal authorities” to search for fingerprints and DNA evidence? Was it Anthrax or some other mysterious poisonous substance? A ransom demand? Death threats to kill the President? Unholy pictures of her and John Allegro intertwined in a backseat grope fest while slathered in cake frosting?

Hardly. It was nothing that glamorous or disgusting. It was actually information that had been out in the public for almost a year.

I received a copy of the “vile and libelous” letter that appeared to upset Emily Convers. It turns out that it wasn’t a letter at all. The mailing also didn’t contain any new information. Most of the information has been public for months.

Someone in Monroe mailed out a copy of an article I wrote on MFI-Miami 11 months ago about the people funding United Monroe.

You can read it here. You can also Google Emily Convers and/or United Monroe to find it.

In addition, the United Monroe donor list attached to the article is a matter of public record from the New York State Board of Elections.

The envelope also contained a copy of a Suburbanites blog post from January about United Monroe strong-arming local businesses. That blog is also readily available on the internet.

The “letter” did not threaten anyone nor did it intimidate anyone. All it did was undermine Emily Convers’ credibility. It also reminded Emily Convers about her weight issue.

I’m sure the “federal authorities” told Allegro and Convers:

So let us get this straight… you want us to investigate a picture floating around of some fat woman eating a cake?

Was This An Emily Convers Hoax Or a Cry For Attention?

Now the question is, why would anyone mail this out? We have all seen this stuff a million times on Facebook.

Is this an Emily Convers hoax to get sympathy and support for the dying United Monroe?

Let’s face it. United Monroe is sinking faster than the Titanic. Donations are down 95%. The GOP shunned John Allegro and Dan Castricone last year because of their affiliation with United Monroe.

It also appears Castricone lost his Allstate Agency because of his affiliation with United Monroe.

United Monroe has been handed legal defeat after legal defeat. They are also causing property values to crash in the Town of Monroe.

Emily Convers has become the Mr. Magoo of Orange County. She creates a chain reaction of havoc and destruction with every step she makes.

United Monroe is on life support because of her and John Allegro. So anything is possible.