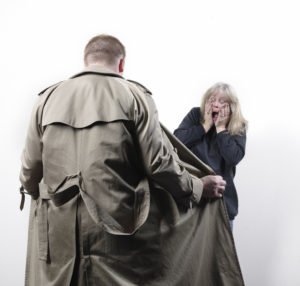 It appears WTBQ Station Manager Taylor Sterling is trying her hand at fundraising once again. This time she is attempting a coat drive and she has recruited Orange County Executive Steve Neuhaus’ pervert pal Robert Krahulik. Krahulik is doing the voice overs for the PSAs.

WTBQ has made no public statements about how Sterling’s second attempt at fundraising is going. Steve Neuhaus had to bail out her holiday food and toy drive with help of Merlin Entertainment. Merlin is proposing to build a Legoland in Goshen.

Krahulik also buys 30 minutes of airtime a week on WTBQ. He uses his paid airtime to promote his law firm Beattie & Krahulik. He also hopes the radio show will make people forget his past as an Anthony Weiner wannabe.

Krahulik resigned as Orange County GOP Chairman amid a sex scandal in 2014. The then 47-year old Anthony Weiner wannabe sent pictures of his penis to several young women. The young girls were all in the 20s and were friends with Krahulik’s then 26-year-old girlfriend.


Krahulik’s ex-girlfriend posted the pictures on social media with the caption:

I just want people to know it’s probably a really good idea if you are in politics to take pictures of your weewee and send it to lots of girls.

I categorically deny sending any lewd photographs to the 26- year-old woman that was the subject of the Facebook post. I will not deny, however, having shared, perhaps, provocative photographs with other people in my past.