Look at the picture to the left that Toxic Taylor Sterling posted on the WTBQ Facebook page. She brags about all the toys in the caption. Do you notice anything odd?

Most of the toys are Legos donated by Merlin Entertainment. You are probably thinking, “Oh, isn’t that awesome of them!”

That is exactly what Toxic Taylor Sterling and WTBQ owner Frank Truatt want you to believe.

What is going on behind the scenes is a little more complicated and puts Sterling’s food and toy drive into a different perspective.

Merlin Entertainment is the developer of the controversial Legoland in Goshen. A development that has divided not only Goshen but most of Orange County.

Merlin Entertainment is also renting a store front in Goshen where they hand out free lego toys to families who might question anything about their plans for development.

Regular listeners to Frank Truatt’s god awful morning show can tell you that Sterling has been promoting Legoland since the proposal was first made public over the summer. Yet, this week she cranked up the nasty rhetoric against critics of the proposal as only Toxic Taylor Sterling can do.

Most of all, she also didn’t expect Uncle Buck to fight back like he has. Uncle Buck enlisted the help of experienced fundraiser Dominick Sammarone. The two of them are kicking her ass so hard that Sterling burst into tears on the air last week over it.

Uncle Buck has raised nearly $2500 for the families of disabled veterans this holiday season. In addition, nearly 70 families were also able to have Thanksgiving dinner because of Uncle Buck’s efforts. Most noteworthy of Uncle Buck’s efforts is that the majority of these donations came from nearly 50 business owners and individuals in Orange County including WTBQ advertisers like Leo Kaytes Ford. Garrett Durland also helped out.

Sterling could only muster a $500 commitment from the Nam Knights Motorcycle Club and a few hundred dollars worth of commitments from political cronies of Orange County Executive Steve Neuhaus.

Toxic Taylor Sterling was sinking and she was sinking fast. As luck would have it she wasn’t the only one having public relations problems.

Legoland in Goshen is also in trouble. Opposition to the proposed Legoland is growing by the day. Legoland’s developers have also stirred up controversy by asking for 30-year tax abatements. 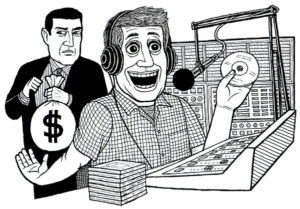 Toxic Taylor Sterling did what she does best. She gets gullible people to give her what she wants by giving them free air time on WTBQ.

It seems like Sterling with the help of Steve Neuhaus marched over to Merlin’s rented office in Goshen and cut a deal. She would promote Merlin’s Legoland proposal on WTBQ in return they would give her hundreds of dollars worth of Legos for her fundraiser.

The deal between Sterling and the Legoland developers seems like a win-win for everyone. The only problem is it’s a form of Payola and it probably illegal.

Payola is when a broadcaster takes secret payments to cast a product in a favorable light and is considered a form of bribery. The FCC defines payola as a violation of the sponsorship identification rule. Furthermore, it is also a violation that could cost Frank Truatt and WTBQ heavy fines. It could also even cost Truatt his broadcasting license.