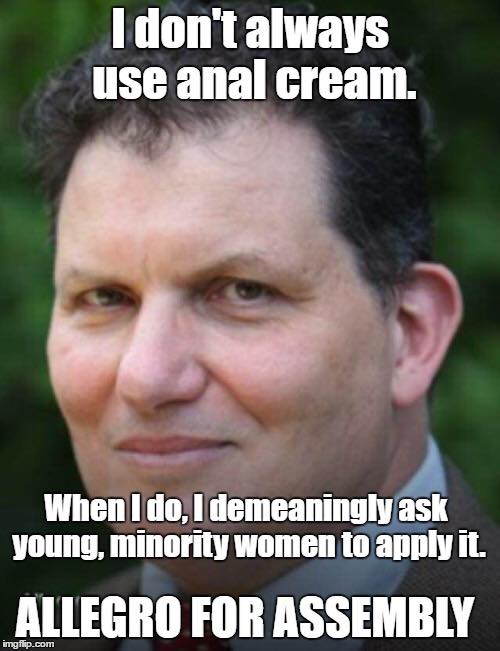 John Allegro made the video and uploaded it to his Youtube channel. It seems like Allegro thought his political friends would find his behavior comical. Allegro didn’t realize that not everyone finds his bigoted toilet humor about receiving rectal massages from Asian women funny. Allegro also doesn’t seem to understand this type of misogynistic toilet humor is not appropriate when you are running for public office.

John Allegro is currently running as a Republican for New York State Assembly for the 98th District. Allegro will be facing off against incumbent Republican Assemblyman Karl Brabenec in the September 13th Republican primary.

MFI-Miami acquired the video from an anonymous source at the Orange County Executive’s office. Our source found Allegro’s behavior disturbingly bigoted and deplorable. In addition, another politician found the video immature and disgusting. So did one member of the NY state Senate. The Senator told MFI-Miami, “How old does this guy think he is? Stuff like this funny when you are 12 years old not when you are in your 50s!”

A Democratic Assemblyman who wished to remain anonymous said, “I work with a lot of good politicians on both sides of the aisle. I don’t see anyone working with this Jackass in Albany!