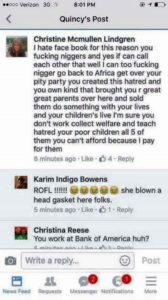 Christine Lindgren learned that posting profanity-laden racist tirades is a bad idea. She also learned posting racist rants can get you fired from a promising career at Bank of America.

I hate Facebook for this reason, you fucking niggers. And yes, if you can call each other that well I can too. Fucking nigger go back to Africa. Get over your pity party. You created this hatred and your own kind that brought your great-great-grandparents over here and sold them. Do something with your lives and your children’s lives. I’m sure you don’t work, collect welfare and teach hatred. Your poor children. All five of them you can’t afford because I pay for them.

The now former BofA Banker deleted the post and her account as a result of the thousands of irate Bank of America customers who called BofA corporate in North Carolina. Customers also threatened to close their accounts.

Bank Of America Executives Not Happy 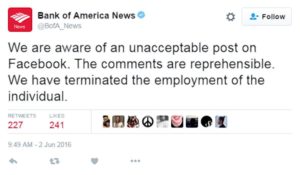 BofA spokesman Andy Aldridge told the New York Daily News, “We are working to reach out to our customers who voiced concerns over social media,”

One person who said she contacted the bank, Nicole Huckaby, told Raw Story, that her daughter canceled her account with it on account of the post.

“They owe black people an apology. The bank didn’t write the post, but at the end of the day, she represented the bank.”

Commenters on the Bank of America’s Facebook page have called out the company for deleting any posts referencing Lindgren’s racist comments. While others complained about the bank’s history of racial insensitivities.