United Monroe activists were not happy after I posted the three-year list of people who donated money to United Monroe. It appears Emily Convers neglected to tell her followers that their contributions to the United Monroe PAC are public record.

United Monroe activists are attempting to usurp the Town of Monroe’s approval of the Hasidic Village of Kiryas Joel. Kiryas Joel wants to expand their borders by roughly one-third of one square mile.

United Monroe is known for their use of cryptic Nazi rants in their opposition to the expansion. They also have no problem using phrases that sound like they were ripped from Hitler’s Mein Kampf.

Emily Convers also uses brown shirt style bullying, frivolous lawsuits and smear campaigns against local politicians. Convers also uses these tactics against anyone. She believes anyone who opposes her is involved in secret Jewish conspiracies against her.

Convers and her followers regularly post unsubstantiated conspiracy theories. Her favorite subject is blogging about bogus allegations of politicians being involved in voter fraud, political bribes, and kickbacks.

The histrionic rhetoric hit a fever pitch in the past week when Emily Convers threatened to sue me for libel. Convers apparently didn’t like my comments about her or United Monroe.

I had to explain to her the mechanics of how libel lawsuits work which is surprising considering her history of filing frivolous lawsuits. She concluded the conversation by calling me an “asshole.” 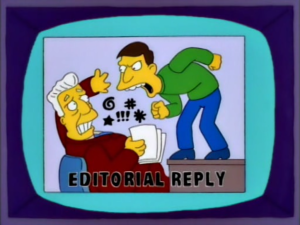 Convers then unleashed her band of wannabe internet brownshirts. The rhetoric by United Monroe devolved into public name calling and vulgarity after I posted the list of donors.

I estimate that the hardcore group of United Monroe activists to be roughly 20-30 people. I also believe they either have serious mental issues or are just a bunch angry bigoted drunks.

What Are Teachers In Monroe Teaching Our Children?

It became clear over the weekend that several activists had gone overboard with the Dutch courage. High School Teacher Chuck Sommerlad at John Jay High School in Hopewell Junction had some terse comments. I had to remove most of them because they made absolutely no sense.  He made comments claiming that the FBI raided Kiryas Joel. This is not entirely true. Sommerlad writes:

“There are great people on this list. They are fighting against the Gestapo known as Kiryas Joel. Kiryas Joel is running illegal activity and was just raided yesterday by the FBI!!!!!

Sommerlad goes off on a half-cocked profanity-laden tirade about MFI-Miami:

MFI-which apparently stands for Motherhalf-cockednorant….it is you that is the NAZI. Spreading false information and wrongly attacking others. There’s a nice place in hell for bastards like you.

Is this what Sommerlad is teaching our kids?

Sommerlad wasn’t the only teacher to post bizarre and crazy comments. Christine Durso who teaches at the culturally diverse Speyer Legacy School in Manhattan echoed Convers’ cryptic Nazi rhetoric.
Durso wrote comments under the screen name Christine BD. She compared the Hasidic Jews of the Kiryas Joel to Nazis. She writes:
You see Nazis forced people to act and think like them, not unlike the political arm of KJ.

Durso goes on to reiterate the unsubstantiated claim echoed by Emily Convers. She claims the law is not on Kiryas Joel’s side. She then drones on about conspiracy theories. Durso asserts the debunked theory that Kiryas Joel paid off politicians in Monroe and New York State:

Amusing the law isn’t on their side – they’ve purchased the political parties due to our previous disinterest.”

She also claims that the Hasidic of Kiryas Joel are free to violate Fair Housing Laws. They can afford fancy lawyers to help them rape the system:

They don’t follow fair housing – that alone is one of their many illegal tactics – thru can afford fancy lawyers because they rape the system.

Durso then continues with her rant by referring to the Hasidic of Kiryas Joel as an Italian Mafia cult:

So you’re comparing what essentially is the fox reading the henhouse with United Monroe being the henhouse and the fox being KJ and yet we’re supposed to be OK with the Fox stealing the eggs not the case we moved here because of the role nature and we’re watching that be destroyed by a combination cult/Italian Mafia.

Todd Jennings summed up the nonsensical hysteria and over the top paranoia of United Monroe. Jennings likes to promote the conspiracy theory that MFI-Miami is in the pockets of Kiryas Joel:

“This is what’s going on in KJ. The power elite there have a takeover plan, and they will stop at nothing to reach their goals. They’ll lie, circumvent the law, repress those who oppose them, propagandize. Anything it takes. It seems that greed, for lack of a better word, is good.

And when we (we meaning those who want honest government) fight back against their thievery and corruption, they cry “anti-Semitism”. Since you’re making the same empty “anti-Semite” claims as the Satmar community, one could assume they have you in their pocket. Why else would you sh-t all over the entire community of Monroe, and greater Orange County for that matter?

There are literally thousands of people who are sick and tired of the lies, the deceit, and the greed.

Chester, Woodbury, Cornwall, Blooming Grove, Washingtonville – all these towns realize what’s happening – the payola, the corruption, the backdoor deals – and they are banding together with Monroe to put a stop to it. They won’t let KJ buy politicians anymore so that they can steal water, pollute the environment, clear cut the land for selfish purposes, further burden the welfare and social services system by indiscriminately increasing the size of “America’s poorest community” by meteoric proportions.

Most people I know – myself included – covet the First Amendment and its statement on freedom of religion. It’s part of America’s cultural foundation. But to be sure, the Constitution doesn’t give anyone the right to destroy the environment, to choke infrastructure, or to have others pay for the road to their “manifest destiny.

I also received a lot of comments from United Monroe supporters bashing Jews on another article I wrote earlier this month about Allstate Insurance customers threatening to cancel their insurance policies with Allstate Insurance. During his short-lived congressional race, Castricone used cryptic Nazi rhetoric that would make even Nation of Islam Leader Louis Farrakhan blush. The bigotry and hate of United Monroe activists and their supporters appeared front and center.

“It’s very valid the jews are the worst people on the planet they are killing and stealing the lives and land of the Palestinians!!! And because so many people are in their pockets most of the world stays quiet. The jews are a parasite to humanity and you really believe you are gods chosen people what a fucking joke! And don’t get me started how you jews played a major role in the slave trade! So don’t ever in your filthy life try to play me for a fool.”

Mike Altaro also doesn’t think too highly of the Hasidics of Kiryas Joel. He writes, “The people from KJ are predominantly scumbags. It has nothing to do with their religion.”