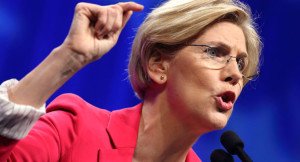 Last week, Bank of America, Citigroup, J.P. Morgan and Goldman Sachs held a secret meeting discussing the possibility of withholding campaign contributions to Democrats in key races next year because of Massachusetts Senator Elizabeth Warren’s push for stricter financial reform and for several banks to broken up.  The banks are concerned about the growing popularity of Warren’s negative portrayal of Wall Street.

According to CNN, Warren told a packed room at a Barnes & Noble in New York City’s Union Square while promoting her book, “You bet I believe it’s a serious threat. It is so brazen. If they think they can say in public, ‘I don’t like your tone, I don’t like the way you talk about financial regulation’ … I got news for them: bring it on.”

Warren stressed that she only wants two things from Wall Street: banks shouldn’t be able to cheat people, and no financial institution should be able to risk destroying the economy because it’s too big to fail.

Warren told the crowd, “If they want to fight on either one of those, I’m ready,”

The stakes could be high for Warren if New York Senator. Charles Schumer who has close ties to business and who is widely viewed as the top candidate for the leadership post after Sen. Harry Reid retires in 2016.
Schumer and Warren would likely clash on financial regulation, and he might push her to soften her tone in order to help fundraising.

If the banks didn’t contribute, the Democratic Senatorial Campaign Committee could lose up to $15,000 per bank a year — and possibly more if individual bankers stopped donating as well.

Warren is already trying to fight back by asking supporters for donations in a blog post Friday.