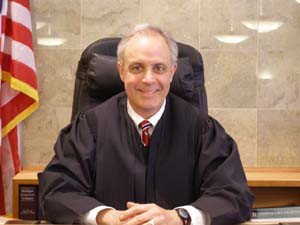 Haley is stepping down due to lawyers and litigants questioning his competence and ethics as a judge. He is also growing tired of defendants in criminal cases mocking him on social media and his courtroom.

It all began in March of 2011 when MFI-Miami ran an investigation into Haley’s past. A past that would make a sane person scratch their head and wonder how anyone would vote for this mook.

Haley has demonstrated an inability to effectively represent his clients in the courtroom and disrespecting the office to which he was elected.

In 2003, Michigan Judge Michael Haley, while sitting on the bench in an open courtroom accepted tickets to a University of Michigan football game from an attorney, Richard Benedict.

Michigan Judge Michael Haley was later be censured by the Judicial Tenure Commission.

Haley’s Past Comes Back To Haunt Him

In December of 2006, one of Haley’s former clients from the 1980s emerged. Jim Gainforth was released. He was asking a judge in Grand Traverse County to allow his case to be re-heard.

In 1984, Michigan Judge Michael Haley, then a public defender, represented Jim Gainforth who was accused of murdering a gas station clerk, James Burton with an M-16, during a robbery.  While sitting in prison for 22 years, Gainforth proclaimed his innocence.

His new lawyer, Val Newman claimed in the only thing that tied Gainforth to the murder was the testimony of Doug Hutchinson.  Hutchinson claimed he and Gainforth hung out at the station. They left and waited for Burton to come outside.  That is when Hutchinson said he saw Gainforth shoot Burton.  Hutchinson then went inside and grabbed $200 out of the cash register and fled.

As it turns out, there are two problems with this claim.  First, Gainforth was discharged from the U.S. Army 18 months early because a blind spot in his eye prevented him from being able to sight an M-16.  Second, the witnesses say the man hanging out at the gas station with Gainforth did not match Hutchinson’s description.

These two key pieces of evidence were not brought up as part of Gainforth’s defense in 1985. Newman claimed this constituted “inadequate legal representation” by Haley and therefore was grounds for an appeal.

As a witness, Haley claimed he didn’t know anything about Gainforth’s military discharge or his bad eyesight.  Anne Stanton wrote in the December 28, 2006 edition of the Northern Express:

Newman presented a report in which Gainforth told a police officer that he was discharged from the Army because he couldn’t qualify with his M-16. Haley said he couldn’t remember seeing it, although he acknowledged all the reports were available to him.  “I can only assume there was a good reason (not to bring up his vision difficulties),… because his eye sight difficulties would have been great stuff to use. But to do a laundry list defense—‘Folks he really wasn’t there, but if he was there, his eyesight was lousy.’ I’m not sure that would have worked.

Circuit Judge Tom Power then granted Gainforth a new hearing based on the evidence Haley never presented in 1985.

Haley, who 18 months ago, announced his retirement effective at the end of January of this year, ran for re-election in November anyway so he could be eligible for a large pension and so he could be considered for any “visiting” judge positions that may open up.

The Michigan Legislature cut the budgets for the district court system which eliminated funding for a third judge in 86th District.