Some overpasses in Detroit are in such dreadful shape that MDOT has installed sheets of plywood between the beams to protect vehicles from falling concrete.” -Pat Shellenbarger, Bridge Magazine 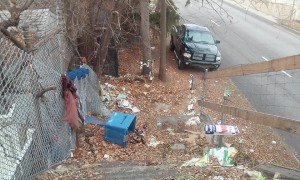 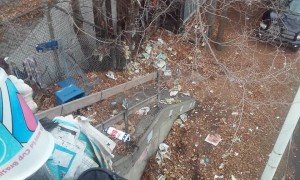 These pictures were taken at a pedestrian overpass that crosses the Southfield Freeway (M-39) in Detroit earlier today. The overpass is supposed to maintained by the Michigan Department of Transportation.

The condition of this overpass raises serious questions for members of the GOP dominated Michigan Legislature most of whom come from outside of a fifty mile radius of Detroit’s western and northern borders about what their priorities are.

The question to members of the legislature is a simple one. Would you let your kids endure an urbanized Indiana Jones adventure by making them walk across a pedestrian overpass with holes so large they can see cars underneath their feet with stairway hand rails made of chicken wire and boards fastened together with zip ties in order to go to school?

I’m guessing you would all collectively say, “No, way!”

You would never want to subject your kids to such dangerous conditions. After all, isn’t that why you live in places like northern Oakland County, Alpena or Traverse City, so your kids don’t have to deal with living in horrific conditions like this?

So, why are kids in Detroit any different?