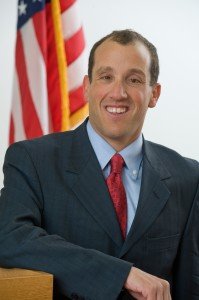 On a cold night, last weekend before the election that saw Democrat candidates across the U.S. get slaughtered by voters, blind Supreme Court Candidate Richard Bernstein stood in front of the statue of a Spartan warrior at Michigan State University and gave what was one of the best political speeches of 2014. It was a speech heard by only about 50-60 people and received no media play the days before the election but it was a speech that only a man who had triumphed over obstacles all his life could deliver.

Bernstein, an avid marathon runner who has been blind since birth, gave a fiery speech that went beyond his own candidacy and talked about what the courts can and should be doing for the people who elect them.

Bernstein who is a trial attorney in his family’s deeply rooted Detroit law firm with their 1-800-Call-Sam commercials and sponsoring of major sporting events was one of the few Democratic candidates to win in last Tuesday’s election.

Michigan news website, MLive, posted the below clip of the speech:

We want to connect with people. We want to serve with people. Yes, this election will be our finest hour, because we’re here tonight because we believe that extraordinary things can, will, and ultimately must happen for us all. -Newly Elected Michigan Supreme Court Justice Richard Bernstein