With Less Than A week Before Her Re-Election, Florida Media Finally Makes A Big Deal About Florida Barbie Being A Puppet To Special Interest Groups

With less than a week to go before the November election, the Miami Herald, one of the last major newspapers in Florida, is finally running a piece about Florida Attorney General Pam Bondi’s ties to lobbyists. A few months back, the alternative newspaper, New Times wrote about Bondi being the worst AG in Florida history.

For nearly three years, I’ve been writing about Bondi’s intimate ties to lobbyists and how investigations seem to be brushed under the rug after the entities being investigated make sizable contributions to her re-election campaign.

Pam Bondi a former prosecutor and Assistant State Attorney was swept into office in 2010 thanks in part to the Koch Brothers funded Tea Party movement in Florida and Sarah Palin. Although, she was successful, Bondi’s past has not been without controversy.  It was revealed during 2010 that she failed to vote in 1984, 1986, 1988, 1990, 1992, 2002 & 2008. She also switched from being a Democrat to a Republican because her political ambitions due to the GOP domination of Gulf Coast politics.

In 2010, Bondi and The Republican Party of Florida received $453,000 in campaign contributions from Banking and Real Estate Lobbyists. $126,500 came from the Florida Bankers Association, who last year unsuccessfully lobbied the Florida legislature to make Florida a non-judicial foreclosure state. The Republicans also received $65,000 from American Bankers Insurance Company.  Bank of America who is one of the targets of the 50-state investigation gave to the Florida GOP $10,000 with a meager $500 going to Pam Bondi.  The Florida Realtors were definitely attempting to buy influence with the Florida GOP, between the Realtors PAC and the Florida Association of Realtors, they gave $290,000 to the Florida GOP.

The Florida GOP also help bankroll Bondi’s campaign by giving her $800,000 to cover consultants, phone banks, office rent and campaign staff.  Part of this money came from the $448,000 that was given to the GOP from the above mentioned groups.  Groups like the Florida Bankers Association or the Realtors PAC often give money to the various state or national parties or both with the intent that it will be used for a specific candidate.  This is done to prevent an appearance impropriety because it helps create a cloud of mystery over who gave what to whom and when.   Unfortunately for Pam Bondi, its pretty apparent where the money went. 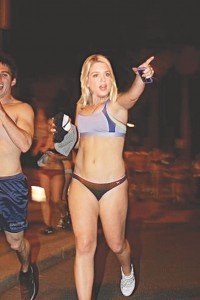 Bondi went to bat for one of her contributors, document processing company, LPS, who contributed to her 2010 campaign, when one of their executives got indicted for running a document forging operation under the nose of LPS executives. She even lobbied the Michigan Attorney General not to pursue charges against Lorraine Brown who ran LPS’s DocX division.

Bondi and Governor Rick Scott pushed for tax breaks for robo-signing mill, Lender Processing Services while they were under investigation by her office.

Bondi shut down the foreclosure fraud investigations initiated by her predecessor, Bill McCollum that were actually helping homeowners. She also attacked the 50-state National Mortgage Settlement from all sides with the tenacity of a morbidly obese guy at an all-you-can-eat Chinese restaurant buffet only to change her mind at the 11th hour when it was announced Florida would receive a big fat novelty sized check.

Then last year, Bondi something that can only be construed as a serious “fuck you” to legal and political ethics.

Schneiderman sued Trump over Trump University for $40 million in August claiming that nearly all of the 5,000 students who paid up to $35,000 thought they would get to meet Trump but instead all they got was their picture taken in front of a life-size cardboard cut out of the billionaire who has taken a detour into the Twilight Zone of nuttiness over the past decade.

After being informed that several of the complaints included in Schneiderman’s lawsuit were from Florida residents and discovering dozens of complaints were filed with the Florida Attorney General’s office under the leadership of her predecessor, Bill McCollum, Bondi announced she was launching an investigation into Trump Institute and to see if Florida would join New York in a multi-state action.

Four days after Bondi announced she was launching an investigation, Donald Trump gave her a nice $25,000 donation to her campaign committee.