Bend Over Michigan No Matter Who Wins The Governor’s Race, You’re Still Going To Get Treated Like Ned Beatty In Deliverance

“You’re going to find out, if you stick around, that a lot of the people holding political power are some bizarre incompetent sons of bitches” -Detroit Political Consultant Adolph Mongo

Some of my relatives have called me asking me for my opinion of who to vote for in the Michigan Governors race. Unfortunately, I have to tell them it may be time to follow in the foot steps of the millions like myself who have left Michigan in the past three decades. The reality of life in Michigan is that no matter how much you want to slice and dice it in the political Vegomatic, Michiganders have been getting the shaft from both parties since 1990 and it won’t be changing in 2015 or 2019.

In 2010, Snyder bragged about being the successful CEO of Gateway Computers and how he earned the reputation of being “One Tough Nerd” but what he and the Michigan GOP weren’t telling people in Michigan is that he drove Gateway into near bankruptcy and then came back to liquidate the company and sell the carcass to a Chinese company in Taipei.

As CEO of Gateway Computers, Snyder presided over the company from the mid-1990s until the dot-com bust. The board removed him as CEO for not having the foresight to see the dot com crisis on the horizon.

Snyder returned to Gateway as CEO during the final years of the company’s decline and eventual sale in 2007 to Taipei computer manufacturer Acer. Snyder liquidated the company and sold Gateway’s carcass to Acer for the fire sale price for 2% of it’s high of $84.00 prior to the dot-com bust.

Using his Duke Phillips style mind control powers on elitist Democrats, Snyder coasted to victory in 2010 by convincing these wannabe limousine liberals in Oakland and Washtenaw Counties that he was a moderate Republican and that Democratic Candidate Virg Benaro was too crass and blue collar to sit in the Governor’s Mansion. 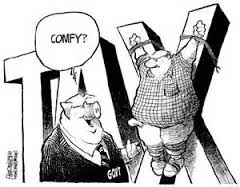 Once in office, Snyder accomplished three things which are now alienating him from voters. He signed legislation taxing pensions while giving tax breaks to corporations.

In 2011, He signed a stealth tax increase on homeowners by changing the formula used for the Michigan Homestead Tax Credit.

Snyder’s greatest achievement and most controversial his successful passage of Right-To-Work.

He recruited Speaker of the Michigan House, Jase Bolger, who has a history of being sued for unethical business practices and son of pyramid marketing scheme pioneer and former Amway Chairman Dick DeVos to help strong arm Republican members of the legislature into passing Right-To-Work (RTW) legislation.  RTW restricts the rights of employees in the work place and effectively destroys their collective bargaining rights.  The Michigan Legislature passed the legislation in a lame duck session with no debate in under 6 hours (a process that normally takes 8 months) in a locked down building surrounded by riot police.

Nearly two years ago, Snyder and the GOP promised that RTW will make Michigan more competitive and will attract businesses because lower labor costs. Here it’s 2 years later and RTW and the corporate welfare haven’t stopped the exodus of people leaving the state.

What Snyder and the GOP seem to have blinded themselves from is how does Michigan attract skilled employees to Michigan by offering low wages? If I’m a potential employee and I have a choice of taking a job in Michigan or in another RTW state like Florida which doesn’t have a state income tax for the same wage, guess what? I wouldn’t pick Michigan.

Michigan has nothing to offer people with the skills it needs to compete against not only other RTW states but countries like China or Canada. Michigan, aside from Ann Arbor, offers nothing young skilled millennials want for a long term residency when compared to Atlanta, Austin, Orlando, Miami or New York City.  Even non-RTW states like Illinois, Massachusetts or New York with higher wages, higher taxes, better roads and a better education systems make parts of Michigan look like the nether regions of post-communism Romania.

So, if I’m a business owner and I can’t find employees, guess what? I’m not going to spend millions of dollars on training employees in Michigan when I can go to Texas or Florida and not only get lower business taxes but I can tap into a bigger pool of talented potential employees who I can spend less on training.

He may dealt a major blow to the UAW but so far he hasn’t proven he can stop the exodus of people leaving Michigan along with their vital tax dollars and it shows. 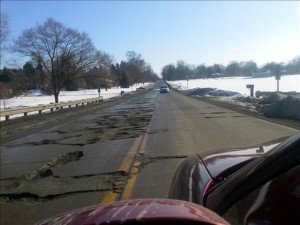 This freeways in southeast Michigan are filled with miles of potholes and broken concrete that make the freeways through war-torn Sarajevo look like a model of freeway construction because there is no revenue to fix it. The Director of the Michigan Department of Transportation last year admitted that his department was so broke that MDOT didn’t have enough money to cut down the six foot high weeds growing on the service drive of I-696 in suburban Detroit.

Unfortunately for the Democrats, both Mark Schauer and the Michigan Democratic Party aren’t offering anything new. Their platform is the same platform they’ve been offering for every election cycle since JFK was in the White House.  The MDP isn’t offering any hard alternatives that voters want or are willing to buy.

Both the MDP platform and Schauer’s platform fail to give any specifics about  business development, job creation or capital improvements in infrastructure or education. These are things bond investors want hear.

Instead, Schauer and the Democrats want to  talk about topics such as equal pay and gay rights that only appeal to special interests within the MDP. Granted these are important issues but the support base for these issues isn’t strong enough to push Schauer over the finishing line. Schauer needs independents and independents who only care about putting food on their table and money in their pocket.

Schauer is also handicapped with 20 years of Mark Brewer’s failure to build and implement a long term strategy including a farm team of young candidates for the Michigan Democratic Party. This is something John Engler and the Michigan GOP did extremely well in the late 1980s and 1990s. This is why they dominate politics on the state level today.

If Schauer does beat Snyder in 3 weeks, he faces the reality of a GOP dominated legislature who will block his every move and will do everything they can to make him as ineffective as Jennifer Granholm.

So regardless of who wins the Governor’s race, Michigan, you’re screwed.