This Is Why MFI-Miami Has Started Investigating Student Loan Debt

In 2010, the New York Times ran a story about an Austrian guy who broke off his engagement with his American fiancee because of her $170,000 student loan debt. Americans expressed their “OMG! That’s horrible!” on social media. Americans then shrugged their shoulders and went back to watching American Idol or Dancing With The Stars. 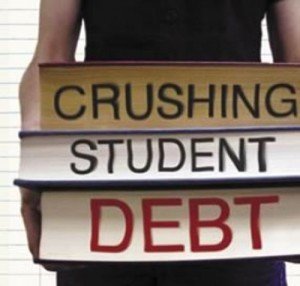 Since 2010, student loan debt has reached $1.5 Trillion. This growing debt is second only to mortgage debt in the U.S. This is bigger than the debt the nation of Colombia owes the IMF.

Last night’s installment of Last Week Tonight With John Oliver highlighted the sleazy practices that private colleges and universities are using bury students into lifetime debt. Student lenders are using the same sleazy tactics that mortgage lenders used to create an artificial housing boom. However, Student Loan Providers have taken the level of sleaze to astronomical proportions. As our friends at Gawker have pointed out:

It’s hard to decide what’s worse: bullying prospective students using their “pain points,” sending nursing students to a Scientology museum to learn about psychiatry, or scamming veterans out of their G.I. Bill benefits.

Unscrupulous lenders and barely competent state legislatures are a recipe for disaster. Especially when it comes to anything to do with banking or finance.

These barely competent lawmakers allow lobbyists from the financial industry to write legislation for them. After all, writing legislation and balancing budgets isn’t as fun as going on lobbyist-paid vacations and golf outings.

Lobbyists from the financial industry are usually the first to come knocking on doors during budget talks. Lobbyists bring gifts for the lawmaker and do whatever it that cuts to public higher education should be one of the first things on the chopping block.  Soon you get a crisis the world hasn’t seen since the fall of the Roman Empire.