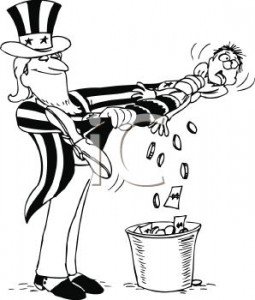 Since the housing crisis began in 2007, the major banks and the major servicers have paid nearly $130 Billion in fines and court settlements to settle mortgage fraud issues with Fannie Mae and Freddie Mac.

Unfortunately, the likelihood of underwater homeowners receiving any type of a “thanks for bailing us out” gift from Fannie Mae or Freddie Mac in the form of a principal write downs have yet to materialize. Advocacy groups had hoped that principal write-downs would come after former Democratic Congressman, Mel Watt took the helm of the Federal Housing Finance Authority, the government agency that oversees Fannie Mae and Freddie Mac,

Watt has been in the captain’s chair of FHFA for six months and Fannie Mae and Freddie Mac are still refusing to give underwater homeowners a principal write-down.

Kevin Whelan, national campaign director of the Home Defenders League told the The New York Post, “The inaction by the FHFA, led by Mel Watt, limits the kind of help the government can offer homeowners — even though lenders like JPMorgan Chase, Citigroup and Bank of America have agreed to about $14.5 billion in consumer relief in three of the biggest settlements,”

Instead of principal write-downs, the FHFA supports the more bank-friendly principal forbearance. This is where the part of the payment is attached to the balance of the loan. This solution only creates a bigger debt for the homeowner because the deferred monies transferred to the back of the loan are still accumulating interest. So instead of loan amount of $350,000 owed the homeowner could conceivably owe $700,000 in 15 years on a house now only worth $200,000. Even if the value of the home increases to 2003 or 2004 levels, the homeowner would still be underwater ten. Homeowners will get a roof over their head for them and their families but at what price?

Homeowners can’t refinance and they can’t sell. So they are stuck paying Fannie Mae and Freddie Mac for at least another decade with all the profits going to the U.S. Treasury.