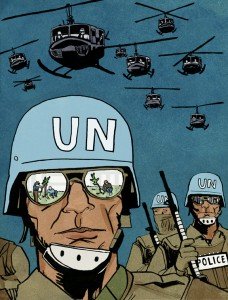 Just for the record, the United Nations won’t be sending in the black helicopters and goosestepping foot soldiers to the streets of Detroit.

I used this misleading headline to prove a point about the misleading and factually inaccurate report several activist groups with ties to American and Canadian Labor submitted to the United Nations Human Rights Office about Detroit’s Water and Sewerage Department.

Obviously, this coalition of uber-lefties, Trotskyists and professional protesters slept through 12th grade government class because there is nothing the United Nations or the federal government can do other than give these people who either don’t want to pay or can’t pay free money. These groups need to petition the state of Michigan because the DWSD is governed under the Municipal Water Liens Act and when it comes to public utilities like the DWSD, public utilities fall under the states’ rights provision of the 10th Amendment of the U.S. Constitution.

The report was written by the Blue Planet Project which is operated by Maude Barlow and a handful of Canadian Environmentalists. It was written on Unifor stationary with data provided by the Detroit People’s Water Board, Food and Water Watch, and the Michigan Welfare Rights Organization.

The report was submitted to the United Nations Human Rights Office asking them to intervene in the Detroit Water and Sewerage Department’s attempt to shut off water to a few hundred people in Detroit not the tens of thousands as stated in media reports. This report is histrionic garbage and shows that it was done to promote a political agenda at Detroit’s expense. This report which you can read below, is filled with assumptions, highly misleading information and unsubstantiated claims from unnamed “victims.”

For example on Page 3 of the report, Barlow and her merry band of tree huggers claim that because of “White Flight” and racial divides in the Detroit area, poor African-Americans who make up 80% of what’s left of Detroit’s population of 650,000, are forced to shoulder the burden of paying for water and sewerage from the Detroit Water and Sewerage Department:

“The burden of paying for city services has fallen onto the residents who have stayed within the economically depressed city, most of whom are African-American. These residents have seen water rates rise by 119 per cent within the last decade. With official, understated unemployment rates at a record high and the official, understated poverty rate at about 40 per cent, Detroit water bills are unaffordable to a significant portion of the population.”

This is not even a remotely accurate statement. Many of the whites who fled Detroit over the past 50 years now live in suburban communities that receive water from the Detroit Water and Sewerage Department. These suburban customers also pay 30% more than Detroit residents and shoulder nearly 70% of the cost of running the DWSD. Suburban municipalities are also responsible for collecting payments on behalf of the DWSD and up until 2011 would send a crew to your house to shut your water off. Wayne County (the county the city of Detroit is located in) was an exception to this because Wayne County had an county ordinance that banned the DWSD and the communities in Wayne County from shutting off the water to occupied residential homes.

The report continues with another claim that the reason for shut off threats to Detroit homeowners is because the city is performing a “cash grab”:

“The Detroit People’s Water Board fears that authorities see people’s unpaid water bills as a “bad debt” and want to sweeten the pot for a private investor by imposing even more of the costs of the system on those least able to bear them. The service cut-offs for anyone more than two months behind in payments appear to be the city’s last-ditch attempt to make up for lost revenues.

Again, this is highly misleading. Homeowners in Oakland and Macomb Counties who are connected to the DWSD have always received warning letters when they fall two payments behind and up until last year, homeowners were billed every three months.  Suburban municipalities in Oakland and Macomb counties have no problem shutting off the water to homeowners who are delinquent and like the Ghostbusters, rush out to the property to shut the water off within days of sending out delinquency notices. Where has this coalition been for the past thirty years while suburban communities and the DWSD was shutting off water in the suburbs? Believe it or not, there are poor people in the suburbs.

In Detroit, a homeowner’s unpaid water bill is sent to the City of Detroit Finance/Treasury Division who applies the arrearage to the homeowner’s tax bill and this is allowed under Michigan’s Municipal Water Liens Act. Other Wayne County municipalities forward unpaid water and sewage bills to the Wayne County Treasurer’s Office for collection as well.

Blue Planet Project admits this on Page 4 of the report:

“People’s overdue water bills are being transferred to their property taxes and people are losing their homes as a result.”

What Blue Planet is leaving out of the report is that the Wayne County Treasurer’s Office has publicly said since 2009 that the county will not do a tax foreclosure based solely on unpaid water and sewer fees for properties in Wayne County. The authors of this report have also failed to supply any evidence that shows Detroit homeowners have faced tax foreclosures over any unpaid water bills.

This coalition led by Blue Planet also demands “fairer rates” and claims water rates for DWSD customers have risen 119% over the past decade but fails to cite a source to this claim.

Blue Planet and Food and Water Watch which is also headed by Barlow, are both based out of Ottawa, Ontario. Barlow omits the fact that DWSD water rates are 15% of what residents in most major Canadian cities pay and that Ottawa, Toronto and Vancouver residents have seen the same triple digit increases over the past decade as Detroit.

Although Detroit is a bargain compared to Ottawa, Toronto and Vancouver, DWSD customers still pay a higher rate than other major American cities. In Fort Lauderdale, Florida, residents pay $19.39 for 5,000 cubic feet of water used. Miami-Dade residents pay $55.00 for every $15,000 gallons used. The New York City Department of Environmental Protection which covers the 5 borroughs of New York City and three other counties charges the average homeowner $991 a year ($83.00 per month).

It amazes me the number of media outlets and politicians who jumped on the histrionic bandwagon of this report without even reading the report or lifting a finger to check the facts of the report.

Beleaguered 85-year old Congressman John Conyers who is currently fighting one of the toughest primary fights of his life, used this report to get his name splattered all over Detroit media by claiming he was going to call on President Obama to demand action on this. Conyers of all people should know that there is little if anything the federal government can do since this is a local and state issue and this falls under the states rights clause of the 10th Amendment.

It also sounds like the authors of this report watched the Robocop movies one too many times because they claim that these water shutoffs are part of some government conspiracy to chase poor blacks out of the city:

“The Michigan Welfare Rights Organization (MWRO) argues that these water cut-offs to poor Detroit households need to be understood within a broader context of Detroit’s appeal in the real estate market. With its proximity to the Great Lakes and the Canadian border, the city is considered prime real estate, and is available at fire sale prices…the organization sees the crackdown as a ploy to drive poor people of color out of the city to facilitate gentrification – what the Michigan Welfare Rights Organization refers to as a “land-grab.”

Seriously? The only people who consider Detroit “prime real estate” are people from the Detroit metropolitan area. Real estate in Metro-Detroit is available for fire sale prices due to deep pocketed investors from places like Dubai, London, Miami or New York don’t want to invest in Detroit or Michigan because they see everyone in Detroit as dirt poor and they have the perception that Michigan is hostile to entrepreneurs.

The UN jumped on the bandwagon of the histrionics and misleading claims detailed in this report by issuing statements hinting the shutoffs were based on discrimination and is an attempt by the state of Michigan to take children away from their parents,

Leilani Farha, the Special Rapporteur on the right to adequate housing, voiced concern that children are being removed by social services from their families and homes because, without access to water, their housing is no longer considered adequate. “If these water disconnections disproportionately affect African-Americans they may be discriminatory, in violation of treaties the United States has ratified,” she noted.

Didn’t anyone verify the information in this report or even bother to read this report before commenting and jumping on the histrionic bandwagon?