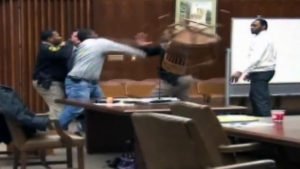 A big shot foreclosure mill lawyer attacked the opposing attorney Bruce Richardson. The scuffle happened as the two were leaving the courtroom. David Dunn, a partner at Hogan Lovells became so enraged when a Brooklyn judge ruled against his client, Bank of New York-Melon in a foreclosure case that he hit Richardson with his briefcase.

Richardson was representing a homeowner as he was leaving the courtroom. Dunn allegedly knocked Richardson to the ground and then hit Richardson with his briefcase so hard the injured lawyer needed back surgery. Richardson is now suing Dunn in Brooklyn Supreme Court.

The Ivy League-educated Dunn allegedly knocked Richardson down. Hit him repeatedly and then climbed over Richardson while hitting him in the chest and face with his briefcase.

Witnesses say Dunn appeared to be annoyed that he had to attend the hearing. When he lost, his annoyance blossomed into full anger as he stormed out of the courtroom. He then assaulted Richardson as the two were leaving the courtroom.

“He was trying to send me a message that if you fight the big firm, I’m going to crush you,” -Foreclosure Defense Attorney Bruce Richardson

The lawsuit states that a court officer witnessed the incident and according to the New York Post:

It’s like something Judge Judy would handle. This is a court case where an attorney got too personally involved, got angry at a court ruling, and took it out on his adversary.

These allegations are absolutely without merit. Beyond that, we have no further comment.