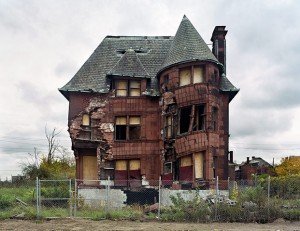 From Buenos Aires to Quebec City and from Calcutta to Prague, people from around the world are gobbling up Detroit’s cheap real estate like Yukon gold speculators from the turn of the last century. This frenzied speculation is fueled by the mainstream media in Detroit that wants you believe Detroit is an urban wonderland filled with adventure like something out of one of those “Shrimp on the Barbie” Australian Tourism Ads with Paul Hogan from the 1980s.

Part of the narrative Detroit wants people outside Michigan to believe is that the Detroit Renaissance that was promised a half of century ago is finally here and that Detroit is again a, “City On The Move.”

Detroit media boasts about how Dan Gilbert from Quicken Loans is attracting his billionaire buddies to invest in Detroit. Unfortunately, this is based more on wishful thinking and propaganda from Dan Gilbert than it is on reality. the fact that Detroit has a white mayor for the first time in 40 years thanks to Dan Gilbert and Detroit slumlord Matty Maroun also makes European investors feel all warm and fuzzy.

As many overseas investors are learning, these dilapidated houses put new meaning into the real estate term, “Handyman Special” as the real estate brokers call them. They are also a test of one’s wallet and patience. As soon as your building materials or appliances are delivered, scrappers and thieves steal it unless you have your own personal security or private goon squad guarding the property. Remember, this is a city where it takes police over an hour to respond to a call and that’s if you can get them to come out to arrest scrappers and thieves.

The website, Business Insider posted a great video showing what you really get for less than a $1000 in the City of Detroit and why $1 or even $500 homes in Detroit are nothing but a a big scam by the City of Detroit to get unsuspecting suckers to shell out thousands of dollars a year to fund the city’s coffers.