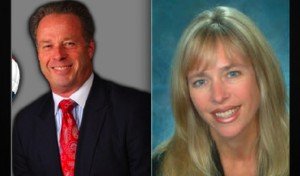 A homeowner has busted a couple of New Jersey realtors with their clothes off. One is a former president of the Passaic County Board of Realtors. He has been accused in a lawsuit of steering potential buyers away from a couple’s vacant Wayne home. Why? He was using the property for “sexual escapades.”

Hidden camera in the home captured the sexual escapades.

Richard and Sandra Weiner of Denville have filed suit in state Superior Court in Passaic County. They allege breach of trust and fiduciary duties against Coldwell Banker of Madison and Wayne residents, and Coldwell agents, Robert Lindsay and Jeannemarie Phelan. The Weiners are seeking compensatory damages. They claim invasion of privacy and infliction of emotional distress. The Weiners are also seeking breach of contract. In addition, they are also alleging illegal trespass of land and other civil counts.

“Defendants Coldwell and Lindsay were engaged by the Weiners to market and sell their home in Wayne, New Jersey. Instead, Lindsay and Phelan, through Lindsay’s illegal and dishonest acts, used the Weiners’ home as their play pad to have sexual relations in the Weiners’ bedroom, among other places in the home,” the suit states.

The lawsuit also alleges Robert Lindsay made a duplicate key to the house. The Weiners are also alleging that Lindsay intentionally listed the house above market value. Lindsay did this intentionally to avoid Realtor traffic in the home while he and Phelan carried on their trysts.