Detroit Mayor-Elect Mike Duggan, the first white Mayor of Detroit in 40 years sent out the invitations for his inauguration on January 7, 2014 except it’s not an “inauguration” its an “Investiture”.

Yep, he’s calling the swearing in of him and his gang of political cronies who milked the public teat for decades an  “Investiture”. He must think he’s Ming the Merciless from Flash Gordon or some medieval monarch being crowned by the Pope.

With Duggan being a protege of the late Wayne County Ed McNamara and Wayne County’s history of public corruption is this a sign of things to come? 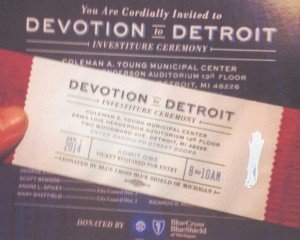