“This is like doing business with a praying mantis. You get seduced, and then eaten alive afterwards” -Steve Jobs 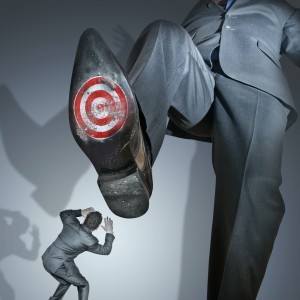 American banks and American businesses have been stomping on the rights of Hispanic-Americans since the U.S. annexed what is now the American Southwest from Mexico after the Mexican-American War in 1848. The U.S. government either turned a blind eye to these abuses and in some cases quietly condoned it.

That was until the Alianza Federal de Mercedes led by Juan Valdez and Reies López Tijerina mounted a brazen daylight raid on the Rio Arriba County courthouse in Tierra Amarilla, New Mexico in 1967.   This incident ignited the Chicano Civil Rights movement of the 1970s that guaranteed equal rights for all Americans of hispanic descent.

Unfortunately, with the aging of Reies López Tijerina and the death of Juan Valdez last year, Hispanics are once again receiving broken promises by the U.S. Government and having their rights trampled on by American businesses.  Banks like Bank of America have illegally displaced thousands of Spanish-speaking American homeowners since the financial crisis began in 2008 especially when it comes to loans owned by Fannie Mae like the one the Garcias have.

Fighting For Their Rights in “El Norte”

Angel and Estela Garcia are an example of the countless stories I have heard from Hispanic homeowners who have been victims of dual tracking and “Sleight of Hand” tricks by Bank of America against Hispanics but Hispanics who use Spanish as their primary language.  All of these homeowners claim that Bank of America denied them access to Spanish speaking staff.

Being based in south Florida and being a former Bank of America depositer, I know Bank of America offers services in a variety of languages including Spanish. Bank of America even goes as far as to send Hispanic homeowners in Florida their mortgage statements in Spanish.

With the decision handed down by the 6th Circuit Court of Appeals, saying Fannie Mae and Freddie Mac are government entities, As Fannie Mae’s servicer, Bank of America should have foreclosed judicially and allowed the Garcias their day in court.  Instead Bank of America opened the door for the Garcias to sue them in a civil rights action saying that their 5th and 14th amendment rights were violated.

Mexicans coming to the U.S. legally have to endure a much more perilous journey getting to the border than their European counterparts.  Unlike Europeans, Mexicans often have to defend themselves against drug lords, sex traffickers, kidnappers, rape gangs, corrupt cops, thieves and slew of other groups that make the bandito thugs from Sergio Leone movies look like the Salvation Army.

For Angel Garcia, the risk of facing these groups for the thousand mile trek through Mexico to the Texas border so that he and his family could live a new life filled with unimaginable opportunities they would never see in central Mexico was worth it.

Clutching to his Green Card as if it were a golden ticket from Charlie and the Chocolate Factory, Angel Garcia finally made it to the Texas border.  For the next decade, he worked his way across America as a migrant farm worker living in dilapidated barracks with other migrant workers.  He would go to sleep every night dreaming of the day when he would be reunited with his wife, Estela and their children who were back in Mexico waiting for permission to emigrate to America.

After settling in the picturesque Polish enclave of Cedar, Michigan, Angel Garcia was finally able to reunite with his wife Estela and their children in the mid-1990s.

In December of 2003, Angel and Estela were able to do something they could never do in Mexico – they bought a house on a piece of property they actually owned.

In 2011, disaster struck when Angel received a botched hernia surgery and couldn’t work for nearly a month.  He and Estela fell behind on his house payments that up until then had been paid on time.  Bank of America who was servicing the loan for Fannie Mae, refused to allow Angel or Estela, who don’t speak English, to speak to a Spanish-speaking representative even though this is a service Bank of America readily offers throughout the U.S.

At wit’s end, the Garcias turned to the CRA housing non-profit, Northwest Michigan Community Action Agency (NMCAA) for help since one of their major benefactors is Bank of America.  NMCAA reached out to both Bank of America and Bank of America’s attorney, Trott & Trott and after jumping through all the hoops, Bank of America agreed to give Angel and Estela a temporary modification.

Angel and Estela made the payments as requested until last May when they received the following letter dated May 26th stating Bank of America had agreed to give them a permanent loan modification:

After making several payments on time, the Garcias then received a check from Bank of America returning the payments and received this letter dated August 6, 2012 from Trott & Trott claiming because they didn’t make any payments or accept the modification offer that Bank of America was now proceeding with foreclosure: