Why Isn’t The Detroit Emergency Financial Manager Fighting The Banks Like This Alabama County? 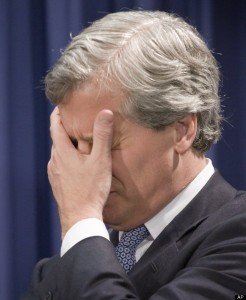 JPMorgan Chase agreed to forgive $842 million of debt owed by Jefferson County, Alabama.  The new agreement follows a $722 million settlement in 2009 with the U.S. SEC related to the Jefferson County financing. So why isn’t the Detroit Emergency Financial Manager doing it?

Jefferson County had hired Bank One to issue $3.1 Billion in bonds to help fund its new sewer system.

The arrangements for the new system had interest rates that reset periodically based on the LIBOR Index, similar to adjustable-rate mortgages also based on the LIBOR Index.  JPMorgan and other banks also sold the county related derivatives to protect against the risk posed by the securities, earning undisclosed fees of about $120 million, according to the county’s former financial adviser. Hey, Detroit Emergency Financial Manager, isn’t this what happened in Detroit?

Business with the county was so lucrative that JPMorgan bankers agreed to pay local counterparts, including Bill Blount for doing little or no work to secure its place in the deals.

In 2008, When credit dried up on Wall Street and the financial crisis was in its infancy, investors dumped Jefferson County’s sewer bonds and their yields soared, driving up the county’s payments. Derivatives that were supposed to protect them against such an event added to the costs they were forced to pay.

This was when Jefferson County discovered they had been a victim of a series of controversial interest rate swaps, initiated in 2002 and 2003 by former convicted Commission President Larry Langford that was to save the county money in the short term. Instead they had the opposite effect and increased the county’s indebtedness to the point that officials have issued formal statements doubting the county’s ability to meet its financial obligations.

In February 2008, Standard & Poor’s lowered Jefferson County bond rating to “junk” status.  On March 7, 2008, Jefferson County failed to post $184 million collateral as required under its sewer bond agreements which put them technically in default.  This triggered an SEC investigation into how municipal bonds were being handled and eventually led to Jefferson County filing Chapter  9 bankruptcy in 2011.

After the SEC investigation in 2008, JPMorgan announced it was getting out of the business of selling derivatives to municipalities. In 2009, during the course of the SEC investigation, JPMorgan, without admitting or denying wrongdoing, agreed to pay $75 million to the SEC and forgive $647 million in derivative fees owed by Jefferson County.

In 2011, JPMorgan agreed to a $228 million settlement with federal and state regulators for allegedly rigging bids on investments that state and local governments buy with the proceeds of municipal bonds, which allowed the bank to pick up added profits. The employees involved had left JPMorgan by that time.”

So the question is why isn’t Detroit Emergency Financial Manager, Kevyn Orr going after UBS, JPMorgan Chase and others for doing this to Detroit instead of forcing draconian austerity cuts that won’t work?

Why Isn’t The Detroit EFM Talking About Reclaiming The $5B Lost Because Of UBS LIBOR Manipulation?