Thousands Celebrate The Death Of The Iron Lady Margaret Thatcher 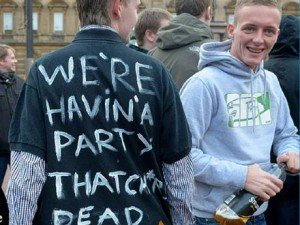 Former British Prime Minister Margaret Thatcher’s death has unexpectedly caused sales of “Ding Dong! The Witch Is Dead” to skyrocket to Number 9 on iTunes Best Sellers List within 24 hours of her death. The song also reached Number 2 on Amazon singles chart and rank 54 on London’s Radio 1 network. The song written by EY Harburg and composed by Harold Arlen for the 1939 MGM cinematic masterpiece, The Wizard of Oz is expected reach even higher sales due to several Facebook campaigns encouraging people to download it.

Upon hearing the about the death of Thatcher who was known as the “Iron Lady” because she ruled over parliament with an iron fist, tens of thousands of people from Edinburgh to London flocked to the streets with champagne bottles and party horns and the Durham Miners’ Association is planning a nationwide party with bands and comedians during her state funeral.

The BBC also announced that a tribute special that aired Monday night was watched by less than 3 million people worldwide.  This is minute  compared to the 3.5 billion worldwide who tuned for the nonstop coverage for the death of Diana, Princess of Wales.