But Are Some African Countries Setting Themselves Up For An African Version Of Red Dawn?

“Merely by describing yourself as black you have started on a road towards emancipation, you have committed yourself to fight against all forces that seek to use your blackness as a stamp that marks you out as a subservient being.” -Steve Biko

When I was at university in suburban Detroit back the 1980s, I had the great fortune of having Vincent Khapoya, author of The African Experience as one of my professors and as my adviser.  Khapoya being from Kenya introduced me, a naive suburban white kid to the speeches and works of Mark Mathabane, Steve Biko and Nelson Mandela.  Now, 25 years later, thanks to Vincent Khapoya, I am still have an interest in the politics and the economics of the African continent and fascinated by the economic changes taking place there especially in places like Namibia and Angola.

About a year ago, I was introduced to works of Dambisa Moyo, a Zambian raised Oxford and Harvard educated economist who specializes in emerging markets and collateralized debt markets, when a family member accidentally bought me her book, How The West Was Lost, thinking it was about Native Americans and Manifest Destiny. I know, the picture of Mao on the cover should have been a give away but hey, I’m from Detroit and if it doesn’t have to with cars or beer people don’t pay attention.  Even Dambisa Moyo found it somewhat humorous when I told her the story via Twitter last year. 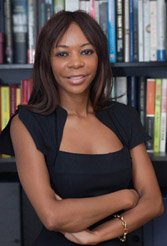 I then read her book, Dead Aid which criticized Western governments and Western do-gooders like Bono from U2 and other groups trying to raise money for the poor in Africa for their arrogant presumptions of the people of Africa and African political structures.  She also points out that had they simply done some research they would have found the billions of dollars being raised was going to corrupt government officials and their families not the people who needed it.   Therefore, the billions of dollars in aid sent to developing African nations has not helped to reduce poverty and increase growth.  In Dead Aid, She draws sharp contrast between African countries that have rejected the aid route and prospered and others that have become aid-dependent and seen poverty increase.  She also talks about how developing African economies should access international capital markets as a way to fund much needed development of their infrastructure, healthcare and educational systems.

While reading Dead Aid, Khapoya’s lectures about African macroeconomics and his dreams of African being looked at as economic equals on the stage of world finance emerged from the forgotten areas of my memory.  It was as if Dambisa Moyo was sitting next me listening to the same lectures 25 years ago.

Moyo also received a lot of criticism from the elites in financial geekdom for being naive.  They said she was living in a fantasy world because African leaders were inexperienced and too ill-equipped to venture into world debt markets.  Again, the arrogance of the white European financial elites from the West.  Yes, the same elites who blast me and MFI-Miami when I’m not around but cower and hide like an abused women in some god awful wife beater Lifetime Channel movie when I show up to testify for my clients in court.

Naturally, I was fascinated by her interview with CNN a few weeks ago and her guest post on the Financial Times website yesterday talking about how elitist naysayers in America and Europe were wrong about Africa.

In the past year, Angola, Tanzania, Morocco and Zambia all issued international debt and many cases the bonds were over-subscribed by 10 times.  This means that there was a demand 10 times than the number of bonds that were issued on their initial public offering.  This is due in part because the bond prices for Angola, Tanzania, Morocco and Zambia were more attractively priced than those of cash strapped European countries like Italy, Portugal or Spain at the time they were issued.

Today, 17 African countries have bond rating of a single B or higher which has led the IMF to predict an annual growth rate of 7%, making Africa the world’s third fastest growing region in 2013 and 2014.  Dambisa Moyo states that African born Millennials are having an impact on the economies across Africa,

“Solid debt and deficit dynamics, attractive labour trends from the improving quality and quantity of young workers, and prospects for productivity gains, are the backbone of the recent IMF forecasts…”

For decades, Western governments along with the IMF have tied aid and loans to improvements in democratic reforms and human rights.  This is also one of the reasons why several countries began accepting aid from the Chinese government. The Chinese having received their share of criticism over human rights and democratic reforms from the West after the bloody crackdown at Tiananmen Square in 1989, did not request reforms as a prerequisite for giving aid.  The Chinese were and still are interested in Africa’s vast deposits of precious metals and minerals and used the carrot of aid as a way to curry favor with African leaders but I’ll get to China’s clandestine neo-colonization plans for Africa later.

Afraid that relations with the Chinese could result in a second wave of colonization, some African countries rejected Chinese aid and decided to issue their own sovereign debt bonds and began trading in Eurobonds.  African countries like trading in Eurobonds because the money borrowed doesn’t come with conditions and they have more control over it.  With issuing sovereign debt bonds on their own, these countries aren’t beholden to anyone except investors who are more concerned with profit than human rights issues nor do they need to worry about an emerging superpower with a colonization plan up their sleeve.

“And although governments may be keen on the supposed fewer conditions that come with foreign-currency debt, it’s not just a blank cheque. Investors are keen to know how the money is going to be spent – on projects that will have long-term economic benefits, rather than just pre-election give-aways or civil service salaries. In Zambia’s case, there was a clear plan of investment and infrastructure.”

Dambisa Moyo explains that there is more going on in Africa than just investments in sovereign debt. Stock markets in across Africa are extremely well:

“Savvy investors are not only focused on Africa’s evolving debt story; on the back of the compelling growth story, the MSCI Africa equity sub index posted returns of over 60 per cent in the last 12 months. The fact that 85 per cent of the roughly 1,000 stocks that trade on Africa’s 19 stock exchanges are non–commodities, indicate significant investment opportunities in the banking and insurance, logistics, telecommunications and retail sectors.”

Along with studying African politics at university, I also had the good fortune of being able to study Chinese culture and language under a great professor, the late John Marney, who as he claims was recruited by the British Foreign Office after studying Oriental Languages at Cambridge because he spoke three different dialects of Chinese (Mandarin,Cantonese and Shanghainese) as well as Japanese and Thai to work at the British Embassy in Beijing during some of the most tumultuous times in China’s post revolution history.

Marney who had been stationed in Asia for nearly 30 years most of which was in Beijing, taught us one important lesson aside from making us memorize Sun Tzu’s “The Art of War” and it’s one that Western governments and Western corporations have never seemed to grasp and it is one that we in the west are now paying the price for especially if Max Keiser‘s prediction of a currency war erupts.

“Just because the Chinese may be communists, it doesn’t mean they haven’t forgot their roots as conquerors, merchants and traders.  They will be a superpower again as they were 1000 years ago and if the West is to survive economically, it needs to remember that short term economic thinking to the Chinese is 5-10 years and long term thinking is 25 to 50 years.   They will also never tell you as an outsider what their ultimate goal is or what they are thinking.”

Since 2005, the Chinese have been pumping billions of dollars of capital into Africa aside from just humanitarian aid and some African nations like Angola have welcomed them with open arms.  This could very well be the welcome mat for Africa to again fall victim to colonization.

Hopefully, African leaders aren’t afraid to open a history book and see what the Chinese are doing in Africa is no different than what the British or the Europeans did in the 18th and 19th century.  They curried favor, pretended to be the friend of tribal leaders and then began colonizing the land with white settlers and business owners like Cecil Rhodes who raped the land.  China wants what the British and European governments wanted 200 years ago – Africa’s treasure chest of precious metals.  The only difference is, the technology didn’t exist 150 years ago or even 60 years ago to fully exploit the true riches of Africa as it does today.   Look at Tibet, one of the first things the Communists did upon gaining control of China was march into Tibet for its unlimited supply of copper, zinc and lead.

I believe Dambisa Moyo is being naive by saying that African leaders can control the Chinese.  I can’t help but to stop and think that is what tribal leaders said about the British and French 200 years ago or what Montezuma said about the Spanish.

Africa would be better off in the long run using the capital borrowed on the international bond markets and the revenue from mining their own natural resources than to grant the Chinese, or for that matter any foreign power an economic foothold on the continent.  This way if they do default on their debt obligations, they can use the precious metals as a way to payoff their sovereign debt.  This is one of the problems the Greeks have right now.  The Greeks could easily pay off their debts if they were allowed to mine the vast amounts of gold and silver buried under their mountains.  Unfortunately, The European Central Bank at the insistence of the German Fourth Reich under Angela Merkel who happen to sit on the largest gold supply in Europe refuse to allow Greece to mine their own gold and silver.  Instead the ECB is forcing austerity down the throats of the Greek people for the benefit of Berlin.  This could very well happen in Africa.