If you have ever had the misfortune of owning in a business in Michigan, you know that dealing with the Michigan Treasury is like being inLynch-directed directed episode of The Sopranos. 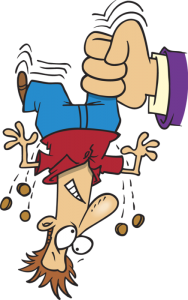 The Michigan Department of Treasury does what they call an “assessment” to determine how much you as a business owe under Michigan’s archaic tax codes. They usually calculate the taxes owed to a dollar amount that is usually 400% to 500% of what you actually owe.  Treasury usually then sends a “Field Representative” to your business to collect the amount they claim you owe.  He/She also has the legal authority to negotiate a payment plan or pad lock your doors if they don’t feel you are negotiating in good faith.

It’s usually at this point that the negotiations get interesting.  The Treasury Field Representative usually brings the assessment with them knowing the business owner doesn’t have that much cash on hand but demands payment anyway.  The Field Representative then shakes the business owner down for what ever they can and then demands weekly or monthly payments compounded with late fees, high interest and other fees for the remaining balance which is usually balloons to 1000x higher than the amount actually owed. If the business owner puts up a fight, the Treasury Field Representative will padlock the building and confiscate any liquor or cigarettes.  Seeing Treasury officials on a side of road in their state issued car swigging a bottle of booze or smoking a cigarette they pried from the hands of some local business owner is not uncommon especially in places like Michigan’s rural Upper Peninsula.

Being a Michigan Treasury official is apparently full of perks including bribes and free drinks as one retired Field Representative told me recently,

“We used to get free drinks in bars all the time.  All we had to do is show them our ID from the state.  The bar owner would openly give drinks to us because they knew we had the ability to shut them down or bust up the joint in a heartbeat if they pissed us off and there was nothing they could do about it.  I knew one guy who used to take $1000 a month for “protection money” from a bar owner up north near the Mackinaw Bridge.  The bar owner had no problem giving it to him just so he wouldn’t have Treasury officials pounding on his door.

With Michigan’s tax revenue rapidly evaporating due to the mass exodus of businesses and people, a desperate Michigan Department of Treasury has apparently decided to use the mafia style tactics on a bigger target and it could have long lasting effects on Michigan’s ability to attract global investment in the state.