Did Kevyn Orr Destroy His Chances Of Being The “Savior Of Detroit”?

For those who missed it last night, Chad Livengood at the Detroit News posted a great piece about how the newly appointed Emergency Financial Manager Kevyn Orr denied being a “tax cheat” but during the interview, he may have actually dug himself deeper into a hole.

“Anyone who thinks I’m a tax cheat, by no stretch of the imagination could they even imagine how much tax I pay each year,” said Orr, adding that 45 percent of his income goes to taxes paid in multiple states and countries.”

Yes, you read that right he said, “states and countries.”

So what countries does he have assets in that require him to pay taxes? Looks like Orr may have more explaining to do.

As you recall from my post yesterday, Kevyn Orr has a history 5-year history of having tax liens placed on his Chevy Chase, Maryland home for not paying income taxes or unemployment taxes on his children’s nanny. 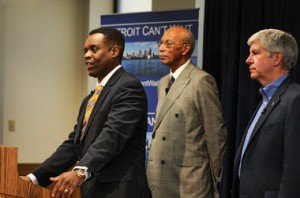 The Detroit News reports, “Orr said he sent a cashier’s check for $11,600 on Saturday to the Maryland division of unemployment, to be delivered today, to settle the two outstanding liens on his home.”

In the piece, Orr later contradicts himself by saying, “Orr says Maryland officials told him late Friday he may owe less than $11,600 but asked that he wait until today to get a final calculation.”

This would also contradict what he told the Detroit Free Press on Saturday, “It’s on me – it’s something that fell through the cracks.  “It’s remarkably embarrassing.  I called and paid it up Friday. I wanted to make sure I addressed it as soon as I could.”

In two days Kevyn Orr has given three different answers about this issue.  So did he or did he not pay the taxes? It looks like he’s hiding something. It also sounds like he just blew his chance to be the man who saved Detroit.

I have to agree with Detroiter Marie Thornton, 62, a former IRS tax analyst who told the Detroit News:

He is the poorest example of someone trying to tell other people to pay their taxes if he’s going to come after them and place liens on their houses.  I think he should be fired before he even starts.

I wrote about this last month. Both Snyder and state Treasurer Andy Dillon are in over their collective heads. The amateurish mistakes made with Orr’s appointment just re-enforce the belief they are clueless.

Snyder’s half-ass vetting process. Kevin Orr playing a game of tax hide and seek with Maryland. This has disaster written all over it and Orr hasn’t even started.  It’s time to kick him to the curb. It’s time to find someone else or put Detroit’s fate in the hands of a federal bankruptcy judge.