Just imagine every time you go to church or pray Jesus’ name you have to pay a royalty. Imagine being forced to pay a royalty when you mumble, “Jesus Christ” under your breath. Or the use Jesus’ name in a variety of different curses. You could also be slapped with an injunction for copyright infringement.  Sound impossible? Not really. 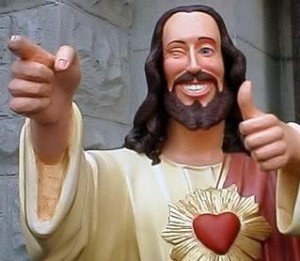 An Italian company named Jesus Jeans, a subsidiary of Turin based BasicNet SpA owns the copyright to the name “Jesus” and they are not afraid to use litigation of biblical proportions to protect their investment in the name “Jesus”

According to the Wall Street Journal, BasicNet first applied for a “Jesus” trademark registration in the U.S. in 1999. However, it took another eight years for the trademark office to grant it.

The Trademark office had initially opposed the trademark.

No One Will Trademark Jesus Jeans

BasicNet trademarked the name “Jesus” through the European Union in 2003. The trademark is valid across the European Union. BasicNet did this to bypass the Britain’s patent office rejection. The British government rejected the application as “morally offensive to the public.”

Maurizio Vitale founded Jesus Jeans in the 1970s. The Italian entrepreneur found inspiration after a trip to New York City. He walked by a theater marquee for the musical, “Jesus Christ Superstar.”

BasicNet acquired Jesus Jeans in the 1990s after Vitale’s death in 1987. Vitale’s heirs drove the company into bankruptcy.

Jesus Jeans has either sued or threatened to sue various startups with the Jesus name. Consequently, most American startups abandoned their trademark efforts using Jesus or Jesus Christ to avoid costly litigation from Jesus Jeans.

So he registered jesussurfed.com and started selling bandannas, T-shirts, hoodies, and bandannas. His logo was a silhouette of Jesus holding a giant surfboard under a palm grove.

Anton filed for the trademark and he soon learned a hard lesson in global commerce. He also received a letter from an American attorney representing Jesus Jeans demanding  that he abandon his application:

If you agree to the foregoing proposal and comply with the proposal, then this matter will be amicably concluded.  If you do not agree, then Jesus Jeans reserves its right to an accounting/damages and all other appropriate relief with respect to your trademark and trademark.

Anton is also bracing for a fight. He told the Wall Street Journal that Jesus Jeans has absolutely nothing to do with anything biblical:

I didn’t think it would be that big of a hassle.

It is unlikely that Jesus Jeans actually make a lawful claim to a monopoly on the name “Jesus.”

BasicNet must establish that it, in fact, owns valid trademarks that Anton used in commerce without BasicNet’s consent.

The judge also ruled trademarks would only apply if it is “associated in the minds of the public with the products or services offered by the proprietor of the mark.”