Records Show Up Until Yesterday Orr Owed The State Of Maryland $16,000 In Unemployment And Income Taxes For Nanny

The Detroit News broke a story yesterday that Detroit’s new Emergency Financial Manager, Kevyn Orr has been hit four times in four years by the state of Maryland for not paying unemployment and income taxes for his family’s nanny. 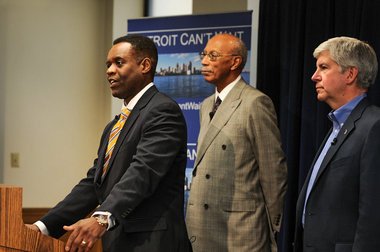 When confronted at the news conference announcing his appointment as Detroit’s new Emergency Financial Manager, Orr along with Michigan governor Rick Snyder who appointed him looked surprised.  Orr responded to the tax records by saying, “I don’t know what they are. That’s surprising to me, to be honest.”

As Orr and the Snyder’s office scrabbled throughout the day on Friday researching this issue when Synder’s spokeswoman, Sara Wurfel responded to media inquiries about the issue.  Wurfel said that Governor Synder was was unaware of it because the tax issue did not come up during Orr’s vetting process.

“Orr spent the day researching the issue and would pay “in full ASAP.” The Washington, D.C., bankruptcy attorney blamed the problems on an outside accountant hired to file his tax returns.  There was apparently an oversight related to a childcare provider unemployment insurance payment.  Immediately upon learning of the potential issue just today, he took action at once to look into and resolve with the state of Maryland.”

Two other liens over unemployment taxes one for $6,985 for 2010 and $9,201 for the 2010-11 tax years were outstanding until Orr paid them yesterday after being bombarded by media inquiries.

Orr told the Detroit Free Press today, “It’s on me – it’s something that fell through the cracks.  “It’s remarkably embarrassing.  I called and paid it up Friday. I wanted to make sure I addressed it as soon as I could.”

Maryland is notorious for overzealous tax collection efforts and for slapping tax liens and to Orr’s credit he did take care of it albeit after the barrage of media inquiries.

Unfortunately, this is not an isolated incident.  This is a pattern.

First, you would think that the Michigan Treasury would discover this during the vetting of Kevyn Orr.  Chris Savage at Eclectablog noticed this as well stating, “Apparently Governor Snyder’s staff aren’t all that details-oriented either since they didn’t know anything about it.”

But then again what can we expect from a guy whose only major accomplishment in life was driving a major American corporation into the ground.

Second, you would think Orr would be more conscience of this after it happened in 2009 and make sure they were paid for 2010 and 2011.  It appears Chris Savage again noticed this as well,  he points out, “One would hope that the guy tasked with saving Detroit from its financial disaster would be a bit more detail oriented than this.”