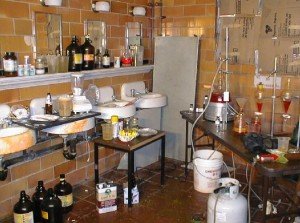 I posted a piece about 6 months ago regarding a young Oregon couple who bought a Freddie Mac foreclosure as a starter home.

They soon discovered after moving in that the property had a long history as a meth lab.

The young couple had an infant son and were new to the neighborhood. They didn’t know the house’s history until two weeks after moving in.

The young couple and their son became violently ill. The walls and floors of the house were embedded with the chemicals for making meth. Husband and father Jonathan Hankins described his experience dealing with Freddie Mac:

(They) won’t take any responsibility for misleading us about the safety of our home. Attorneys just tell us that we should’ve read the fine print. Tell that to my son. Simply walking away will not only negatively impact our credit but would enable banks to continue this trend of severe negligence.

Amateur bootleggers of the Great Depression made moonshine in their bathtub. The great recession and the TV show Breaking Bad have inspired thousands to become wannabe Walter Whites. Unemployed people all over the country are converting their homes into makeshift grow houses for marijuana or meth labs for extra cash. 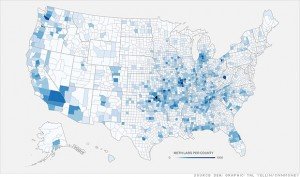 Meth labs are turning up everywhere. One was found in a building of million-dollar-plus apartments on Manhattan’s West Side according to CNNMoney.  However, the vast majority of these homes being converted into meth labs are in America’s heartland. The DEA estimates law enforcement have raided over 84,000 meth labs.

There are no federal or state regulations regarding disclosing drug activity. Most states don’t even require the seller to disclose if the property had any drug-related deaths.

Fannie Mae And Freddie Mac Refuse To Pay For Cleanup

The government-run GSEs say it’s caveat emptor when buying one of their properties. Fannie Mae and Freddie Mac claim buyers are buying these properties “as is.” Therefore they are not liable for cleanup.

Joseph Mazzuca has inspected and decontaminated over 1500 Fannie Mae and Freddie Mac REO properties. Mazzuca told CNN, “Millions of people live in properties that were used as meth labs,”

In addition, Mazzuca also maintains an interactive map on his website that shows state regulations regarding real estate disclosures.

The DEA also has a website called the National Clandestine Laboratory Register. Clicking on your state will reveal a list of known contaminated properties and addresses.