He’s Smart Because Oprah Says He Is 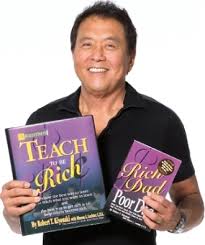 Robert Kiyosaki, author of the bestselling “Rich Dad, Poor Dad” series,  is bringing his version of Brother Love’s Traveling Salvation Show to the Motor City on March 18, 2013 to tell the masses of Detroit how to become rich in real estate.  Yes, that’s right you can learn how to pick yourself up out of the hood and move to Bloomfield Hills or Grosse Pointe Shores in a matter of weeks.   Before you get too excited about Kiyosaki personally helping to motivate you, you need to know that he won’t be attending.  Like the episode of the Simpsons where Krusty the Klown starts a Clown College so local Krusty surrogates can attend in his place, Kiyosaki is sending surrogates to the three events in Dearborn, Livonia and Troy.

If you go, Kiyosaki guarantees you will learn how to:

Here’s what the critics are saying about Kiyosaki and Rich Dad, Poor Dad:

“Rich Dad, Poor Dad is one of the dumbest financial advice books I have ever read. It contains many factual errors and numerous extremely unlikely accounts of events that supposedly occurred. Kiyosaki is a salesman and a motivational speaker. He has no financial expertise and won’t disclose his supposed real estate or other investment success. Rich Dad, Poor Dad contains much wrong advice, much bad advice, some dangerous advice, and virtually no good advice.”

“A good chunk of what’s actually in the book is self-help boilerplate.” “…the no-nonsense pose is apparently convincing enough to blot out the nonsense.”

“The likes of Kiyosaki seems to assert those at the bottom deserve their failure. One of his sayings is “Winners are not afraid of losing, but losers are.” But for a fee he’ll show you how to drag your sorry arse out of the ghetto of mediocrity.”

Kiyosaki filed for Chapter 7 bankruptcy protection last fall after losing a nearly $24 million court judgment from one his earliest financial backers, The Learn Annex.  Acording to the New York Post,  “The Learning Annex was responsible for arranging the speaking engagements and platform that led to his massive success. But apparently the fame went to his head because according to court papers never paid the Annex its rightful share.”

Kiyosaki has also come under fire making up the story of “Rich Dad” to sell books. Kiyosaki tells Smart Money that he died in 1992.  He then says in the same interview that Rich Dad is alive and reclusive invalid. He later admits Rich Dad is an composite of several people and compares Rich Dad to Harry Potter, “Is Harry Potter real? Why don’t you let Rich Dad be a myth, like Harry Potter?”

“So I guess the final word is that Rich Dad is as real as Harry Potter. I suppose that, in turn, means that the way to become financially independent is to get a magic wand—or to write book about fictional characters who did.”