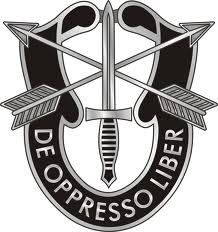 After a decade of countless covert incursions behind enemy lines and serving in Operation Desert Storm as a Green Beret, Jeff Reed and his wife decided to settle down far away from military life, the chaos of the big cities and the bayous of his home state of Louisiana.  Instead, they choose a quiet 20-acre piece of land on the Leelanau Peninsula in picturesque Northern Michigan where they could raise and care for their autistic son who is legally blind. Unfortunately, the one thing the Reeds could not escape was the financial crisis and JPMorgan Chase.

“You don’t seem to want to accept the fact you’re dealing with an expert in guerrilla warfare, with a man who’s the best, with guns, with knives, with his bare hands. A man who’s been trained to ignore pain, ignore weather, to live off the land, to eat things that would make a billy goat puke. His job was to dispose of enemy personnel. To kill! Period! Win by attrition.” -Colonel Samuel Trautman, First Blood

Jeff Reeds began making his new payments of $481.99 on November 1, 2010. He and his wife began to breathe a sigh of relief. They thought the worst was behind them. Their sense of relief soon turned into a nightmare. It was far worse and than anything, the battlefield could throw at Jeff Reed.

The Reeds made their third modification payment in January of 2011. Several weeks later, the Reeds received a letter from Chase indicating their modification had been denied with no explanation. JPMorgan Chase sent them a refund fund check totaling $1,445.97.

Jeff Reed called Chase. What Chase didn’t tell Jeff Reed was that they had Trott & Trott to begin foreclosure proceedings. David Trott, the firm’s founder, and managing partner is a major contributor to the Republican Party. He also served as a Finance Chair for Mitt Romney’s failed presidential campaign.

This ploy is quite common in the modification process. Matter of fact, Chase isn’t the only one who employs this strategy. All the major mortgage servers do it. This is referred to as “Dual Tracking.”

It is essentially a bait and switch tactic.

Chase instructed Trott & Trott to foreclose on Reed’s home while telling Jeff Reed it was a mistake. Chase also failed to tack a foreclosure notice to the door. As a result, the Reeds didn’t know about the foreclosure until they were served with eviction papers.

Jeff Reed received notice for him to appear in Michigan’s 86th District Court on October 12th while in Louisiana burying his late mother.  Trott & Trott filed for an eviction hearing on behalf of Fannie Mae. Jeff Reed immediately informed Trott & Trott that he would be back in Michigan in two weeks.

Does JPMorgan Chase Have Legal Standing?

This was done so that JPMorgan Chase could foreclose as an owner of both the mortgage and the note. However, doing it according to Fannie Mae guidelines would violate Michigan law.

Furthermore, JPMorgan Chase made it appear the ownership of the mortgage reverted back to them prior to September 23, 2011. The date of the Sheriff’s Sale. The Trott & Trott attorney signed an affidavit stating this:

JPMorgan Chase filed a Quit Claim Deeded to Fannie Mae on March 1, 2012. This is also about halfway through Reed’s redemption period:

This Quit Claim Deed is invalid for a number of reasons. It is important to remember Fannie Mae doesn’t just “buy” properties on a whim. They also don’t travel the country buying them at Sheriff’s Sales. Foreclosure mills like to promote this myth. Matter of fact, they don’t buy anything at all because they already have an ownership interest.

The Quit Claim Deed indicates that Fannie Mae is purchasing this property for the sum of $1.00. This document also served two purposes. Fannie Mae already owned it and because JPMorgan Chase is attempting to dodge the Michigan Real Estate Transfer Tax.  Either way, I would argue that the Deed would be invalid.

Let’s face it, it’s just not cool to jerk around combat veterans especially Green Berets or Navy SEALs. It’s just being bad karma and it makes you look like an ingrate. These guys dodged bullets and in some cases took a bullet for the rest of us.

JPMorgan Chase faces many consequences for jerking around Jeff Reed. The consequences range from hundreds if not thousands of letters from members of the Veterans of Foreign Wars and boycotts by other veterans groups. Furthermore, they could create a Ruby Ridge-style situation.

The Department of Defense has done a tremendous amount of work helping our military deal with issues from their combat experiences since the end of the Vietnam War. It’s highly unlikely that Chase could trigger the switch in Jeff Reed’s head. A switch that could turn him into John Rambo from the movie, First Blood.

It’s bad public relations for JPMorgan Chase to be jerking around a guy who dodged bullets so the rest of us didn’t have to. JPMorgan Chase’s Chairman, Jamie Dimon can kiss any shot of becoming the next U.S. Treasury Secretary goodbye if JPMorgan Chase pursues this.