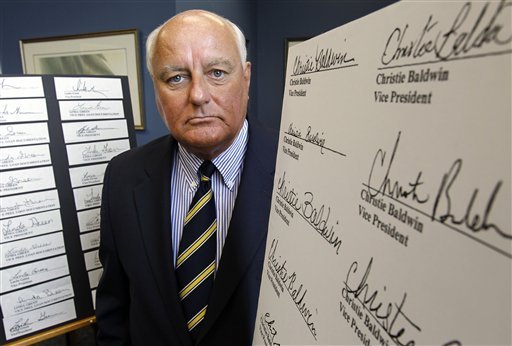 The Registry of Deeds is usually a filled with a cross selection of members from financial geekdom. From amateur real estate speculators who have dreams of being the next Donald Trump to title abstractors and real estate appraiser.  It’s usually a pretty quiet and casual place where you chat with ladies who work behind the counter. However, John O’Brien is about to change all that.

But behind this serene exterior at the South Essex County Register of Deeds in Massachusetts, a battle is about to erupt that could turn into financial geekdom’s Battle of Thermopylae.

John O’Brien, the Registrar started this fight last November when he sent a letter to Massachusetts AG Martha Coakley requesting an investigation to see if MERS had been bypassing Massachusetts filing fee requirements.  Then, after a further investigation of public records in Essex County, he announced in February he was seeking $22 million in lost recording fees and taxes from unrecorded mortgage assignments that were tracked through the MERS system since 1998.   He estimates the state of Massachusetts has lost nearly $200-$400 million dollars in lost recording fees over the past decade.

O’Brien says, “If they had followed the law, the public would know who was buying and selling their mortgage, and it would have been an open, honest and transparent process.  The fact that they deliberately chose to create a for-profit private cyber Registry of Deeds whose only purpose was to avoid paying the same fees as everyone else and keeping the public in the dark as to who was the rightful owner of the mortgage clearly demonstrates to me that this was a scheme of epic proportions.”

With their typical arrogance, MERS ignored him.  John O’Brien refused to be ignored and like Michael Collins and other tough Irishman before him, O’Brien then decided to take a more drastic action.  He went after one of the banks that helped create the MERS system-Bank of America.

He asked for and received permission from Massachusetts Treasurer Steve Grossman to pull $25 million in deposits his department had with Bank of America to Century Bank and Trust, a local non-MERS affiliated bank in Medford, Massachusetts.  He made sure everyone knew he did it and he is encouraging other Registrars to do the same thing.

Naturally, Bank of America wasn’t happy and their spokesman, T.J. Crawford issued a catty response when asked about it by Tim McLaughlin at the Business Journal, “This is not a discussion we’re going to have with Mr. O’Brien through the media.”

As the story of what he did began spreading, MERS finally did respond by saying that O’Brien’s assertions are unfounded.  A MERS spokespeople always try to claim that, “MERS is filling a void in the county recording system.”

However, the MERS website bolsters O’Brien’s argument, “MERS acts as nominee in the county land records for the lender and servicer. Any loan registered on the MERS® System is inoculated against future assignments because MERS remains the nominal mortgagee no matter how many times servicing is traded.”

O’Brien correctly argues that MERS was set up as a shadow registry system to avoid paying registration fees and mortgage taxes in states like New York and Florida.

The problem is that MERS has been peeing on the leg of homeowners and politicians and convincing them that it’s raining for over a decade.  Now that everyone is beginning to feel it through their pant leg and noticing the smell, MERS has no idea what to tell people.