But Linda Orlans Is As Close As Detroit Can Get To Ilsa Koch, She-Wolf Of The SS 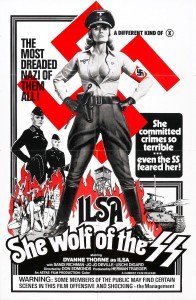 I first came across Ilsa Koch wannabe Linda Orlans two years ago. Her firm tried unsuccessfully to kick an abused women with mental illness out of her home in western Massachusetts. Dealing with Linda Orlans is like dealing with Ilsa Koch, She-Wolf of the SS.

I still remember the conversation I had with one of her attorneys during that investigation.  He droned on for what seemed like hours boasting about his law degree from Harvard.

I explained to him that I wasn’t impressed with his Harvard credentials.

I’m from Detroit and if you want to impress me have some take a crowbar or a baseball bat to the back of a guy’s neck at the Battle of the Overpass. Then kick the shit out of the assailant.

I thought this was going to be the last I heard about this firm run by a wannabe Ilsa Koch. That was until I began working on the Lucas case last spring. Linda Orlans made Lynne Lucas to live her life as if she was a character in a John Grisham novel.

You would think all this would be enough to quench the financial bloodlust of this wannabe Ilsa Koch. Picking fights with frail women is as bad as a thug beating up that 101-year-old woman with a walker for $33.00.

Unfortunately, this firm doesn’t stop at tormenting helpless women. They also go after the families of our fighting men and women overseas. Linda Orlans decides to whore her firm out to do things they know are blatantly illegal. I wasn’t at the hearings involving Sgt. Hurley’s lawsuit but they probably used the same Nuremberg defense of, “I was only following orders,” like attorney Timothy Myers did in the Lucas case.

Hurley was a Michigan National Guardsman, deployed to Iraq. Hurley was dodging IEDs in his Humvee in Iraq and dreaming of his wife and their two small children,

Meanwhile, Linda Orlans and her hatchet man Timothy Myers were illegally foreclosing on the Hurley home.  Orlans and Myers knew this was in violation of the Servicemembers Civil Relief Act. Yet, they proceeded anyway.

In March 2009, the five-year legal fight was over. A federal judge ruled that the 2004 foreclosure violated federal law. However, Sergeant Hurley’s war wasn’t over yet. He had to continue fighting for another two years. Orlans and their clients fought him over how much they owed him in damages.

Sgt. Hurley’s lawsuit also attracted the attention of the U.S. Department of Justice which is now investigating both Saxon Mortgage and Deutsche Bank.

Naturally, Saxon’s other attorney filed paperwork that characterized the investigation as “merely a preliminary investigation based on unproven allegations, for which no liability or wrongdoing has been found.